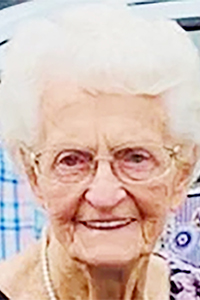 Nell Davis Crain, 91, of Pine, passed away peacefully at her home Tuesday, June 16, 2020, surrounded by her family. She was a longtime active member of Pine Missionary Baptist Church and a former beautician for many years. Nell worked, alongside her family, for 40 years at Bennie’s Garden Center. She was always a loving and devoted wife, mother, grandmother and friend.

Visitation was at Pine Missionary Baptist Church on Friday, June 19, from 9 a.m. until 11 a.m. A funeral service was held in the church at 11 a.m. Friday, June 19, with Bro. Adam Luper and Bro. Brent King officiating. Burial followed in the Pine Community Cemetery.