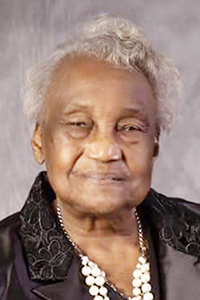 Mrs. Mary Brown Stewart was born Dec. 28, 1929, in Kokomo, Miss., to the late Willie Mae Thomas Brown Johnson and the late James Conway Brown. She was the eldest of three daughters. She departed this life on Tuesday morning April 7, 2020, at Our Lady of the Angels Hospital in Bogalusa.

She was married to the late T.G. Ginn in her younger years and later in life she married the late John Stewart. She attended Central Memorial High School and later she attended Johnson’s School of Cosmetology and worked several years at John Jay’s salon in New Orleans. Her love of people and the desire to serve others led her to work as a nursing assistant at St. Tammany Parish Hospital where she retired after many years of service. She was a member of the Sweet Beulah Baptist Church under the leadership of Rev. James Magee. She was also active in the Senior Mission. She also was a member of the Central Memorial High School Mass reunion committee and a member of the AARP Council on Aging.

She was a fun loving woman with just the right combination of sweetness and sassiness. She loved planting flowers, fishing, decorating, and her many social activities especially her monthly gatherings. She loved her family and friends and her little dog Chance. If you needed a hand, a friend, a ride, she was willing and available. We were blessed to have celebrated her 90th birthday in December with a surprise gathering of family and friends. She received her flowers while living and thoroughly enjoyed the attention. The event was captured in a beautiful photo book that she proudly showed to all who came by.

She was preceded in death by her parents; husband; her son, Val Leroy Ginn; her sister, Hilda Kilbourne; and her cousin reared as a brother, Jewel Bridges.