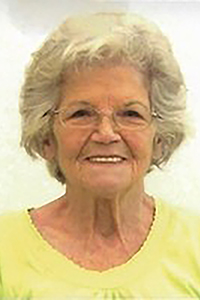 Johnnie Lou Williams Rester passed away on Sunday, March 29, 2020, surrounded by her loving family. She was born on Jan. 16, 1939, to Willie J. and Bernadine Williams. She was a lifelong resident of Varnado.

She is survived by her daughters, Angela (Ricky) Adams of Varnado, and Andrea (Johnny) Williams of Bogalusa; her grandchildren, Whitney(Blake) Phillips of Husser, Nicholas Adams of Varnado, Rebekka (Chris) Strahan of Angie, Heather (Mitchell) Castleberry of Bogalusa, Aaron (Lindsay) Green of Alexandria, and Evan Williams of Orlando, Fla.; and also survived by her great-grandchildren, Makayla, Makinsley, Myles, Jackson, Jamie, Ethan and Mason; and her sisters, Mayvonne (Maurice) Cole of Fort Worth, Texas, Lois Luper of Angie, and Glenda (Daniel) Keaton of Angie; and her special nephews, Trey (Stacey) Rester of Bogalusa, and Herbie (Theresa) Williams of Angie. She was preceded in death by her grandson, Jonathan Rester; her parents, Willie J. and Bernadine Williams; and her brothers, Willie “Dick” Williams and Jewel Williams.

Johnnie was a graduated from Varnado High School as valedictorian. She was an active member of First Missionary Baptist Church in Varnado. She retired as manager after 25 years of service with the Department of Motor Vehicles, where she made many friends. Her love for children led to her working with TLC Tender Loving Care, visiting home daycares and also becoming a volunteer with CASA. After that, she went to work at Walmart as a greeter for many years. She will be missed by family and friends.

A Graveside Service will be held on Thursday, April 2, at 11:30 a.m. in Seal Cemetery in Varnado. Online condolences may be offered on the Poole-Ritchie Funeral Home website at www.pooleritchiefuneralhome.com.

Ruthy Perry-Stull went to be with the Lord on Thursday, March 19, 2020. Ruthy was the wife of the late... read more