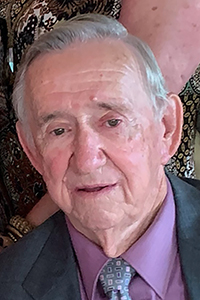 RC was born on Dec. 20, 1933 in White Sands, Miss. He was the youngest son of Matt Newman and Mary Tullos Jarrell (Perlis). He was preceded in death by his parents along with his eight brothers and sisters: Louis, Howard, Merle “Doc,” Earl, Dixie, Rosetta, Gladys, and Jeane.

He was an active member of Monroe Street Baptist Church and the Center Masonic Lodge #244. He was a retiree of Crown Zellerbach Box Plant. He enjoyed many activities such as gardening, repairing watches and Sunday dinner with his family.

The Memorial Service will be held at Monroe Street Baptist Church on Monday, Jan. 27. Visitation will begin at 11 a.m. with the service to follow at 2 p.m.

“Blessed are the pure in heart: for they shall see God” (Matthew 5:8). Mrs. Juanita Rachel Pugh Magee was born... read more