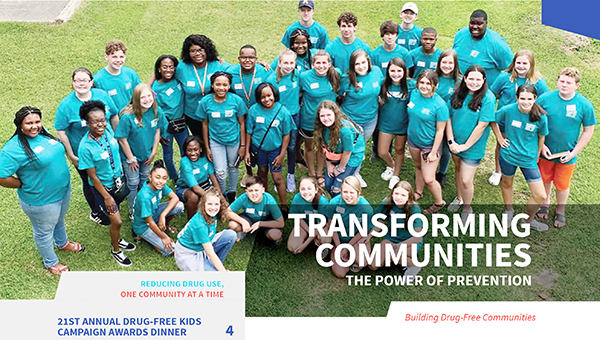 A photograph of the Washington Parish Youth Coalition was featured on the most recent national newsletter of the Community Anti-Drug Coalitions of America (CADCA).

A national publication recently featured several young people in Washington Parish who are making a difference in their community.

The cover of the newsletter featured a photograph of the members of the Washington Parish Youth Coalition (WPYC), who campaign to help make the parish drug and tobacco-free. Also, WPYC member and Varnado High School student LaDarrick Smith was the subject of the newsletter’s “Youth Spotlight” feature on pages 10-11.

In the feature, Smith said that he was inspired to join the coalition by an event he witnessed in seventh grade.

“I witnessed one of my classmates make bad decisions that ultimately led him to drop out of school,” Smith told the newsletter staff. “He was smart, athletic and was destined for a prosperous future, but due to his struggle with substance misuse, his natural gifts and talents went to waste.”

Smith is also a member of the Washington Parish Coalition on Human Services (WPCHS), where he serves as the youth sector representative.

WPYC members help to educate their peers about the dangers of addictive substances. They especially have put a recent focus on electronic cigarettes and opioid abuse, which are both rampant in Washington Parish.

Rhonda Gunnell, WPCHS president, said that she is proud of all of the young people who were featured in the national publication.

“We have such awesome youth,” she said.