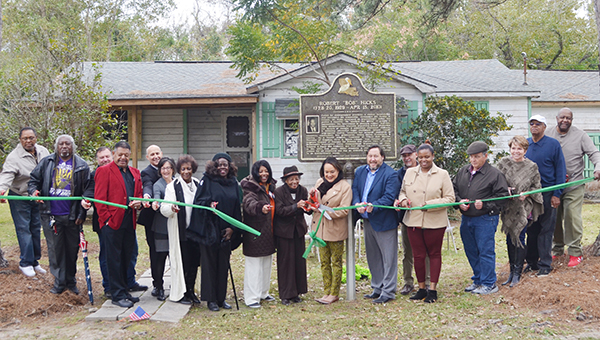 Valeria Hicks, widow of the late Robert “Bob” Hicks, cuts a ribbon Thursday to symbolize the start of a restoration project to turn the Hicks Historic Houses into a civil rights museum. A grant of nearly $500,000 is funding the first phase of the endeavor.

With those four words, Valeria Hicks cut the ribbon Thursday to symbolize the start of Phase I of a project to convert the Hicks Historic Houses into a civil rights museum for Bogalusa and Washington Parish.

Hicks is the widow of the late Robert “Bob” Hicks, one of the leaders of the civil rights movement in Bogalusa. He was also a defendant in a number of lawsuits, when black residents’ took the fight for equality in the workforce, public housing and education to the courtroom.

In March of 2018, the U.S. Dept. of the Interior and the National Park Service awarded a grant of nearly $500,000 to the Robert “Bob” Hicks Foundation, in order to restore and preserve the former home of the foundation’s namesake, as well as an adjacent “1906 mill house.” Collectively, these two structures are known as the Hicks Historic Houses.

On Thursday, a ribbon cutting was held and two signs were unveiled at the site of the houses, signifying the official reception of the grant and the work that will be done to maintain and restore the houses. In addition, foundation executive director Barbara Hicks Collins announced the selection of Beard and Riser, of Greenwood, Miss., to provide architectural services for the project. Collins is also Hicks’ daughter.

The architecture firm has worked on similar civil rights site projects related to Emmitt Till, in Money, Miss., and Sumner, Miss. Till was just 14 years old when he was lynched in 1955, after being accused of offending a white woman in her family’s grocery store. The brutality of his murder and the fact that his killers were acquitted drew attention to the long history of violent persecution of African-Americans in the United States.

“We are excited to get going on this project,” Dale Riser said. “We want to return these sites back to the way they were, and preserve them for years to come.”

John Beard said that he took a tour of Bogalusa earlier in the week, and was very impressed at the number of civil rights related sites and the role that the area played in the civil rights movement.

Both architects said that work at the houses would begin right away.

During Thursday’s ceremony, several officials spoke positively of the plans for the museum. They noted that it would not only bring tourists and history buffs to Bogalusa, but also help to educate future generations about the important history and struggles of past Bogalusa citizens.

“I have been thankful to have been able to watch this project each step of the way,” Bogalusa Mayor Wendy Perrette said. “I think this will be a very positive thing for our community.”

Danielle Keys, Bogalusa City Council member for District B, said that she is excited her son will have the chance to visit the museum and get an opportunity that she never had. The Hicks Historic Houses are located in District B.

“This is a great thing for my district and for the whole city,” Keys said. “And I know that with Barbara working hard, the best is yet to come.”

The signs that were unveiled Thursday indicated that the project is supported by a Historic Preservation Grant, specially an African-American Civil Rights grant, administered by the National Park Service, U.S. Dept. of the Interior, with the assistance of the Division of Historic Preservation, Louisiana Dept. of Culture, Recreation and Tourism. In addition, the signs note that the houses are listed in the National Register of Historic Places.