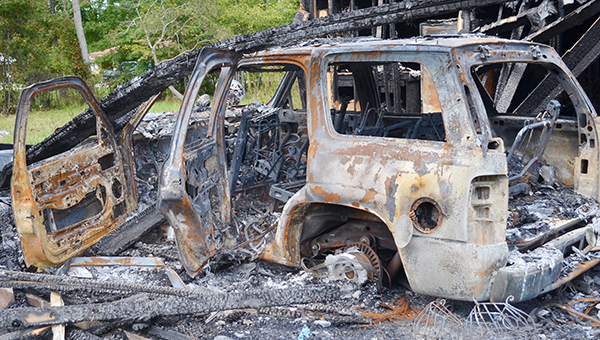 Arson is suspected in this Aug. 20 house fire at 1625 Willie Mays St. The fire gutted the kitchen, dining room area, two-car garage and an SUV. The fire is under investigation by the State Fire Marshal’s Office.

Bogalusa Fire Chief Richard Moody said the house fire raised suspicion since electricity and gas were turned off to the two-story home. The fire gutted the kitchen and dining room area and two-car garage. An SUV on the property was also destroyed.

Jerry Young owns the home. She lives in Hattiesburg, Miss.

“The guy staying at the house couldn’t pay his light bill and his grandmother came down from Hattiesburg, but hadn’t been able to locate him,” Moody said Friday.

Moody said the person staying at the house only had a bicycle and the vehicle was not supposed to have been on the property.

“The vehicle had been reported stolen a few hours earlier,” Moody said. “There was no license plate on the SUV and you couldn’t even make out the color. A person who happened to be looking for his vehicle saw the police and came up to the scene and started asking questions.

“They had no insurance on the vehicle. The license plate and VIN number were destroyed. It’s just one of those deals where you’re trying to figure out what is going on. When a house has no power nor gas, you’ve got to start looking into what started it. You test for any kind of flammable liquid.”

Moody said the fire that destroyed the GMC Sonoma immediately raised concern. The truck had no owner listed.

“The truck was fully involved from the inside. Usually when you have an accidental vehicle fire, it’s around the engine compartment, but this one wasn’t,” Moody said.

Moody said Bogalusa has a reputation for arson.

“Years ago, Bogalusa used to be No. 1 in the state for arson,” Moody said. “In my opinion, people get tired of looking at rundown houses. Sometimes they’re used for illegal means like for doing drugs.

The Bogalusa Fire Department received 120 total calls in August. Of that number, 11 were structure fires, seven were motor vehicle accidents and 63 were medical assistance calls.