No fest, but plenty of melons available 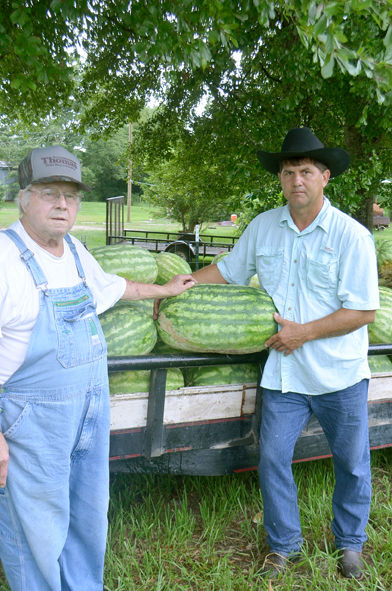 Watermelon growers in the Bogalusa area recently reported production and quality of the crop was down because of too much rain.

That is not exactly the case, according to Thomas Community veteran melon grower Zander Thomas, who operates a produce stand on Louisiana Highway 438. In fact, he said his melons are thriving. He has 60 acres of melons planted.

“We have good Washington Parish melons. The people who said there were no good melons this year were planting in lower land. We plant out on the hills.”

Thomas estimated he has grown 12,000 melons this season. He said they all weigh between 30 and 40 pounds.

“It’s a bad year, but we still have good, tasty watermelons,” Thomas said.

Thomas claimed there is a recipe for growing quality watermelons. It’s a secret known only by some of his neighbors.

“My brother, Kevin, had the recipe. He chose how we planted watermelons. No, I don’t want to share the recipe, but it is what we do and the type of fertilizer we use that is the secret,” Thomas said. “Some of the neighbors have the recipe.”

Thomas said he learned from his father, Richard Ned Thomas, how to grow the best melons. Neighbors such as Neil Ledet, R.O. Thomas, Wade Seal, Red Jones and Gary Thomas have all shared their knowledge.

“Mr. Ledet is from Larose and came and helped me with my melons,” said Thomas. “He has been here in Washington Parish for 41 years. Mr. Red grew melons here for a long time when a lot of people had quit.”

Thomas said he grew up around the farm.

“We lived and ate what we grew coming up,” Thomas said. “Most of the people around here did. I’m 47, and I was raised on a farm doing this. It is hard work.”

Thomas said this year’s melon crop has its own unique qualities.

“They’re sweet this year but not as sweet as they have been because of the rain,” Thomas said. “They’re still sweeter than most — even with the rain. The rain wouldn’t quit this year, but the crop still survived. Melons get better and better the more the sun shines.”

Thomas is the brother of Washington Parish President Richard Ned Thomas. Zander Thomas has one other brother, Ronnie, and four sisters, Sherry, Shannon, Lorraine and Laurie. He said farming was simply a way of life.

“Washington Parish watermelons are still the best,” Thomas said. “I probably give away as much as I sell. Everybody wants their watermelon for the Fourth of July.”