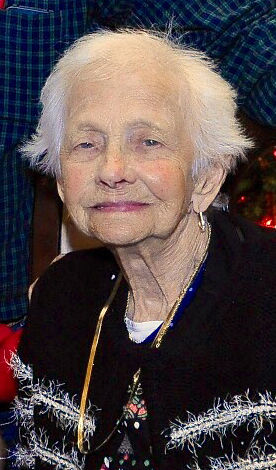 Emily Pommier Duke was born on Dec. 8, 1921, in Mamou, La., and passed away in her sleep on Christmas Day 2014 in Bogalusa at the home of her eldest son. She was proud to have received her GED as an adult working mother who maintained a home, which she help build, at 920 N. Fifth St. in the Duplechin Addition, being the third house added in 1954. She was a homemaker until she became office manager for duFurniture Store and then later at a floor covering store. She was a daughter of Flores Pommier and Omerice Fontenot Pommier.

She is survived by two sons, Merlin Duke and his wife, Eleanor Watson Duke, of Bogalusa. They have two sons, David Merlin Duke, who is an assistant district attorney and city prosecutor in Bogalusa. Their second son is Damon Watson Duke, who is a videographer for Charter Media and is married to Nikki Stewart Duke. She has only one great grandchild, Finn Gabriel Duke, 2 years old, who celebrated Christmas Eve by posing for photos on her lap. They live in Madisonville.

Her younger son, Clarence Nolan Duke, a meteorologist in Kansas City, is married to homemaker Karyl Peterson Duke, and they are the parents of two children, Emily Lorraine Duke, a student at a Southern Baptist seminary in Fort Worth, Texas, and one son, Andrew Jackson Duke, a recent high school graduate.

She has two surviving stepsisters in Berna Guillory and Bernice Guillory McGee, both of Mamou.

She was preceded in death by her husband, Clarence Shockley Duke from Newton County Mississippi; and her middle son, Charles Edward Duke, who was married to Barbara Ann Brown of Elton and the father of one daughter, Trischa Ann Duke, a college professor of English at the University of Chicago, and Brandon Charles Duke of of the construction industry in Baton Rouge.

Her body will lie in state at Quirk and Sons in Eunice with the Rev. Tim Moffett, pastor of the First Baptist Church, conducting services at 2 p.m. on Monday, Dec. 29, 2014. Visitation begins at 10 a.m.