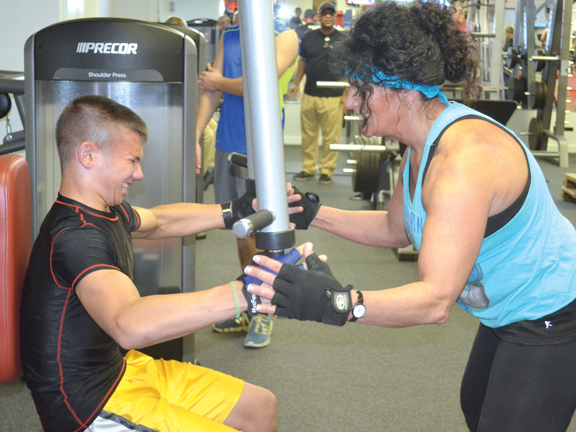 For decades, men and women have worked up a sweat pumping iron and otherwise using weights to get themselves into optimal shape in a big room at the Avenue B YMCA, affectionately called the Bull Pen.

But last week the much-used equipment, which also lately included things like treadmills and exercise bikes, was cleared out and taken away.

“The old stuff was 30 years old,” said Chief Volunteer Officer Stuart Parker. “It still worked, but it had gotten to the age where it was time to replace it.

“Thanks to (state Sen.) Ben Nevers and (state Rep.) Harold Ritchie, we were able to get a $95,000 capital outlay. This is just a first step for a new Y. The new equipment is here now, but it will move to the new Y when it’s built.”

The new Y, a joint venture of the city of Bogalusa, the YMCA and the YWCA, will be a part of a Community Center now being planned for the Avenue B ballpark property. The city is currently working to obtain additional funding for the project.

In the meantime, the new equipment is getting rave reviews from longtime Bull Pen participants, including John “Bull” Hartzog Jr. for whom the Bull Pen was named. The room was packed Monday evening.

“This is exactly what the Y has been working for,” said Bull Hartzog. “I initially went with the Y and purchased the equipment for the Bull Pen. I did it so I could have a better place to work out and to benefit the Y.

“They’ve always striven to update the equipment, and it’s great they were able to finally get it. It’s come a long way. This kind of closes one chapter and opens another.”

The new chapter is titled the “Fitness Center.”

“It’s not called the Bull Pen any more,” said Parker. “Fitness Center is more generic. This is not just for men. It’s for men, women and kids.”

The testosterone-heavy atmosphere of what started out as something of a man cave has lightened with the addition of increasingly more women. Some are attracted by the aerobic equipment, which now includes four treadmills, two ellipticals, a high stepper, two stationary bikes and other devices. But more and more females are learning that weight work also does their bodies good.

Hartzog’s wife, Sharon, who has worked out in the space since day one, has won a number of awards for her bodybuilding, and the couple together won the Louisiana State Championship in 1993.

She encourages women to join the Fitness Center and said women should not fear getting too “bulked up.”

“Our bodies don’t have the hormones to bulk up,” Hartzog said. “The women you see in competitions use steroids.

“Using weights tones you, and as you get older it can help fight osteoporosis.”

Todd Graham, another long timer, was moving from one piece of new equipment to another working his muscles. He said he remembered the early days when the only cooling for the space was provided by a huge box fan. Hartzog even had to cobble dumbbells out of other free weights, he said.

“To me this has always been home,” Graham said. “I always said that other gyms had nicer equipment and there was just one thing to do here — work out. But now we have the equipment, and it’s a whole lot nicer. The atmosphere has changed. My wife might even like to join up.”

Parker hopes Mrs. Graham will take advantage of the opportunity.

“The new type of equipment is tight,” he said. “It’s more friendly. And it will work you. It will exercise every part of your body.

“And we have three TVs that people on the treadmills can plug headphones into, so time flies!”

Already, young people like John William Hartzog III, who grew up in the space with his parents, and Will Arata and David Crain are pushing weights and promoting membership.

Arata and Crain said they’ve been regulars for a while, and they’re trying to get their friends to realize they don’t have to go to St. Tammany Parish or elsewhere to get a good workout.

“Some of them go to Cross Gates in Slidell,” Arata said. “But there are more free weights and machines here. They have everything here that they have at Cross Gates.”

On Monday, YMCA board member Elbert Buckley looked around the room and said it had been a long time since he’d seen so many people using the space.

“I’m excited,” he said. “This is such a benefit for the community.”

Parker was excited, too.

“The Y tries to provide good things for the people of Bogalusa,” he said. “The C in YMCA stands for Christian, and we believe in family values. People need to take advantage of the opportunity to get their kids off the streets. We have a batting cage and boxing, art and photography, and we offer free after-school tutoring. And we’re a non-profit, so the money goes right back into programs.”

Now the Y has a top-notch Fitness Center.

“Obesity is a problem in our country today,” Parker said. “If you want to live longer, you need to get off the couch and do something. If you want quality days, you need to take care of your body. We all have a choice.

“If you exercise, you can have a good quality life. If you don’t exercise you have to put up with heart attacks, diabetes and whatever else goes with being overweight or out of shape. Exercising has to become a way of life for people.”

Sharon Hartzog is now training her 16-year-old son in the familiar but updated space.

“I was a little sad to see the old equipment go,” she said. “But when I saw and worked out on the new equipment, I was like, ‘Wow, this feels so smooth and awesome.’

“I am very excited about the gym at the YMCA Fitness Center. But in my heart it will always be the Bull Pen.”

Parker said the center is certified for the Humana Silver Sneakers program and could qualify under other insurance programs.

Monthly membership costs $70 per family, $55 for a husband and wife, $30 per individual and $25 for members of the military, police or fire departments or employees of Rayburn Correctional Center.