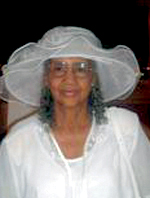 Antronette Harvey Magee, 83, departed this life May 14, 2013, at Lakeview Regional Medical Center in Covington. She was born Nov. 19, 1929, to the late Deacon Pearlie Harvey and Mother Mattie Lee Magee Harvey. She was the oldest of 12 children.

She was married to the late Deacon Ollie Magee Sr. To this union 14 children were born. She was also mother to 12 foster children.

Visitation will be held Monday, May 20 at Crain & Sons Funeral Home in Franklinton from 2-5 p.m., followed by a family hour from 5-7 p.m.

The funeral service will be held on Tuesday at 11 a.m. at Magee’s Temple Church of God In Christ, with Supt. Cecealine Tate, pastor, officiating. Interment will follow at Bethel Church Cemetery.