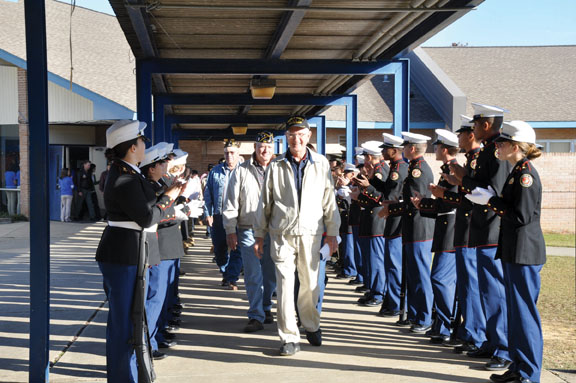 In an annual tradition of honoring local servicemen and -women, a breakfast and Veterans Day Program was held Friday morning at Franklinton High School.

During the event, breakfast was served in the school’s library for the veterans and their guests, with the Student Council, as the official host, in charge of the planning, preparation and serving.

After all had finished enjoying their meal and catching up with their friends and fellow veterans, the guests of honor made their way to the gym for the program, as JROTC members lined either side of the walkway and applauded the veterans.

As the program got under way, the JROTC presented the colors and the FHS Demon Regiment led the national anthem. Then members of the Student Council paid tribute to the veterans and discussed with the assembled student body the significance of the Veterans Day observance.

Franklinton High teacher and Student Council sponsor Toni Tageant started the program in 1996. Veterans Day, she said, was previously a day students were out of school. When the school board changed that policy and made Veterans Day a school day, it encouraged the schools to have programs honoring all those who have served in the military.

Taking it one step further, Franklinton High decided to also host a breakfast before its program, Tageant said.

“We felt it’s just so important for our student body to know how many local people have served,” she said.

Local veterans, Tageant said, have always been receptive to participating in the program.

“I’ve had a Korean-Era veteran tell me that this was the first time he was ever honored for his service, was through this, so it’s a wonderful day,” she said.

Among the veterans participating were James Wood, who served with the U.S. Army in Europe during World War II and was awarded three Purple Hearts, and U.S. Army veteran Billy Evans, Tageant’s father.

“I have two uncles who were in the Pacific,” she said. “I have another uncle who died on an aircraft carrier in World War II, hit by a kamikaze, so I was just raised to be very patriotic.”

Tageant, who is married to Franklinton High head baseball coach Jeff Tageant, said her husband’s father was also in the military. Thus, both think that instilling a sense of patriotism in their students is important, Toni Tageant said.

About 50 veterans took part in the event, but Tageant said the number has been as high as 100 in past years.

At the program’s beginnings, Tageant said, more members of the Greatest Generation and World War II veterans were alive. That, she said, is the sad part of hosting the Veterans Day observance. During the 15 years the program has been held, a number of “really fine men” who attended the programs, including Purple Heart recipients and prisoners of war and veterans of wars fought in Europe, the Pacific, Korea and Vietnam have been lost, she said.

Part of the Veterans Day program is a PowerPoint slideshow that features nearly 1,000 pictures of local veterans. The slideshow, Tageant said, started out small but has grown over the years, as more pictures are brought in by students, veterans or family members.

“To me, it’s like an archive,” she said. “It just a very special thing that we have all these local veterans’ pictures.”

Those memories are also being captured during the event, Tageant said. At a program held several years ago, for example, a picture was taken of two veterans who passed away before that year’s end.

“It was very special that they had come to our program and they were here together,” she said.

After the slideshow, Franklinton High choir director Kyle Jones performed a rendition of Lee Greenwood’s “God Bless the USA,” and the Demon Regiment trumpeter Taylor Smith closed the ceremony with taps. Tageant said it was one of the smoothest Veterans Day programs the school, where Lisa Tanner is principal, has ever hosted.

“The students were awesome for the entire program,” she said. “You could have heard a pin drop throughout. Everyone was very reverent and respectful. Mrs. Tanner and I were so proud of the outstanding behavior of the student body.”