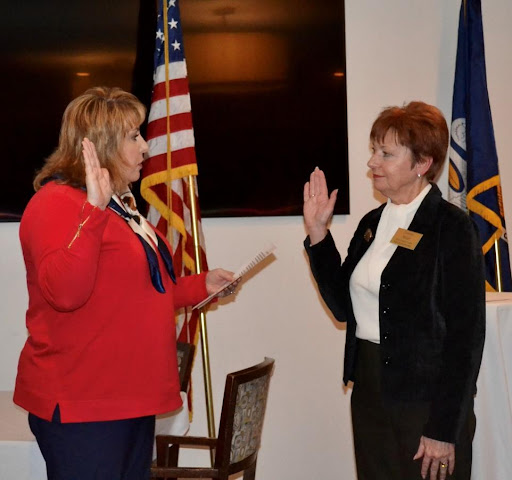 Judge Ellen Creel, District Judge for Division “J” of the Twenty – Second Judicial District Court of the State of Louisiana, swearing in Joannie Miller as the Louisiana Federation of Republican Women Region 7 VP.

The Louisiana Federation of Republican Women (LFRW) recently held their Installation of officers and their first executive board meeting for 2023. Joannie Miller has been elected to serve as the Region 7 VP. She will serve the parishes and clubs of East Feliciana, St. Helena, St. Tammany, Tangipahoa, Washington, and West Feliciana parishes. To date there are seven (7) clubs within this region, Bayou Lacombe Republican Women, Hammond Area Republican Women, Mandeville Republican Women, Republican Professional Women of St Tammany, Republican Women of Franklinton, East St. Tammany Republican Women and Washington Parish Republican Women.
As Region 7 VP, Miller will communicate regularly with the regional clubs, facilitate the organization of new clubs, hold at least two regional meetings, and appoint an assistant from within the region. She will also serve on the LFRW Executive Board.
Miller stated she is, “excited about the upcoming year. During this time, I need to set the tone with the help of all clubs. The first step to leading is listening.”
Republican Women are leading the charge to promote elections, education, and empowerment of women in Republican values.
In Federations across the country the state legislatures are commencing, and the ladies are putting on their red coats and arming themselves with information on the issues to share with their legislators.