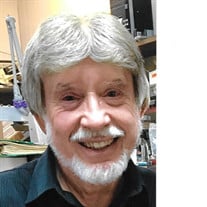 On Jan. 8, 2023, at 80 years of age, Buck passed away peacefully at his home after a three-year illness following a severe stroke. He was born on Dec. 10, 1942 in Meridian, Miss., to the late Yancie Hubert Moseley, Sr. and Ruby Earle Weeks Moseley. Buck grew up in Hattiesburg, Miss., then moved to Kentwood, La. and was a 1961 graduate of Kentwood High School. He attended Northwestern State University in Natchitoches, La., then the Ray Martin School of Jewelry and Fabrications and Gemological Institute of America (GIA).

Buck and his wife Linda owned and operated Moseley’s Franklinton Jewelers for 56 years before retiring in 2019. He was an amazing artist and craftsman. His professional greatest love was creating beautiful pieces of jewelry, repairing Rolex watches and antique pocket watches. Buck was always very civic minded. In his Kentwood days, he was the youngest Rotary Club President ever at 26 years old and enjoyed coaching little league baseball. Buck loved the Washington Parish Free Fair and enjoyed entertaining his family, friends and employees during that week. He was very involved in the Magic City Carnival Association (MCCA). Buck was an active member in the early years of MCCA and served as Duke in 1994 and later King MCCA XXI in 2001. He was a longtime member of Hillcrest Baptist Church.

He was preceded in death by his parents, grandchild Jamie Moseley Varnado, father in law and mother in law Tucker Key and Anita Adams Key.

The family wishes to express a sincere thank you to Southeast Home Health and Passages Hospice for the support.

Visitation will be at Crain Funeral Home (1109 Bene Street, Franklinton) on Friday Jan. 13 from 11 a.m. until 1 p.m. A funeral service will be held in the funeral home chapel at 1 p.m. Friday. Burial will follow in Ellis Cemetery.

Honorary Pallbearers are Don Spiers, Don Varnado, Jerry Bickham and all the Kings of MCCA

To send flowers or a memorial gift to the family of Yancie H. “Buck” Moseley, Jr. please visit our Sympathy Store.