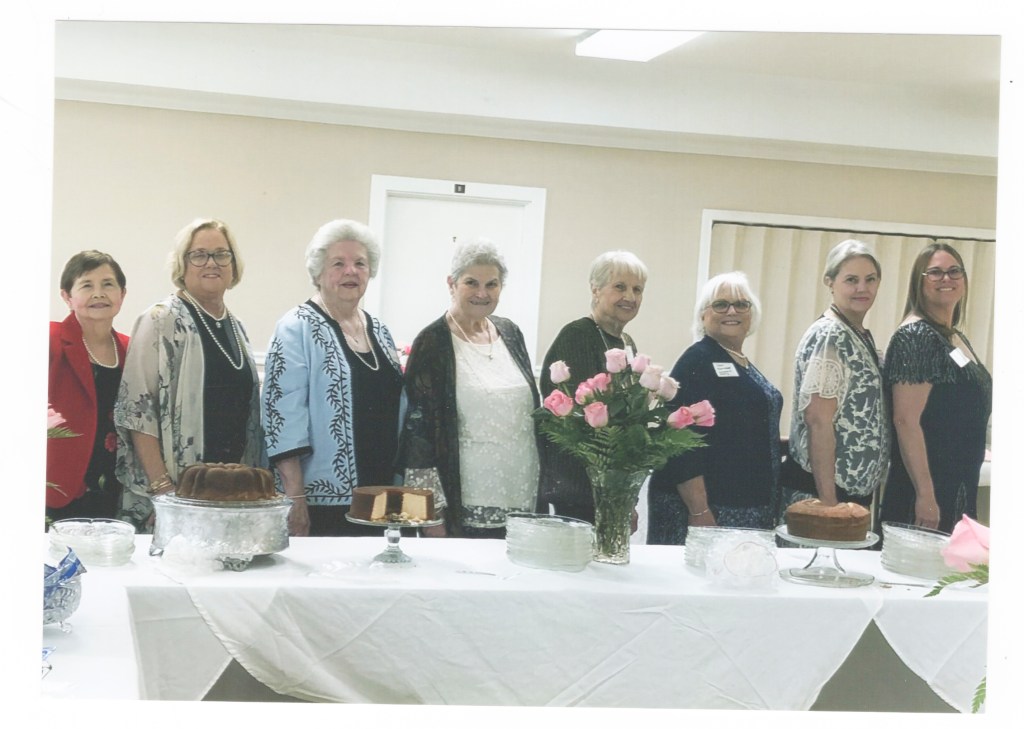 By Historian Brenda Coleman
Special to the Daily News

Ingleside Literary Society reached an important milestone in October, the 100th anniversary of its founding, which was Oct. 4, 1922. To commemorate this momentous occasion, the group hosted a centennial celebration at the First Baptist Church Fellowship Hall on Saturday, Oct. 1, 2022.
Invited guests included local dignitaries, special guests and members of the other two Ingleside groups, Ingleside Symposium and INgleside Quorum. Ingleside Symposium, founded in 1939 and Ingleside Quorum in 1954, were organized by the daughters of the original Ingleside group members.
The Fellowship Hall was beautifully decorated with bouquets of pink roses and greenery, representing the Ingleside Literary Society Flower, the pink rose, and the club colors, pink and green. Bouquets of yellow silk roses adorned the display table. The yellow roses were selected to represent Ingleside Quorum’s flower, the yellow rose. Among the items on the display table were Ingleside Literary Society Yearbooks from 1922 to 1972, scrapbooks depicting the history of the organization from 1922 to 2022 and the Golden Anniversary Album.
Cynthia McGhee was Master of Ceremonies for the centennial program. After the greeting, she opened the program with the Pledge of Allegiance and the recitation of the CLub Collect. McGhee then recognized the local dignitaries, State Representative Malinda White and Bogalusa Mayor Wendy Perrette and invited them to give a few remarks.
White spoke about the important role women play in creating and sustaining the social bonds that bind communities together. She emphasized that women are often the driving force behind efforts to effect meaningful changes in the life of the community. White then read proclamations recognizing the 100th anniversary of Ingleside Literary Society from the State House of Representatives and Governor John Bel Edwards.
Perrette talked about the importance of civic and cultural organizations in building strong communities that are more resilient to disruptions in times of rapid social, political and economic change. She read a proclamation from the City of Bogalusa honoring Ingleside Literary Society on its centennial. McGhee announced that letters and proclamations had also been received from Sheriff Randy Seal, Parish President Richard Ned Thomas and State Representative Beth Mizell.
Following the recognition of local dignitaries, members of the three Ingleside groups were introduced. President Marguerite Adams introduced members of Ingleside Literary Society, Brenda Coleman, Glenda Givens, Janice Goff, Janet Kesterson, Janice Lambert and McGhee. Debbie Bateman represented Ingleside Symposium. Ingleside Quorum members present were Carol Duke, Sandra Ferguson, Hughey Lene Gunt, Holly King, Cindy Melancon and Anne Tate. Special guests were Melissa Seal and Martha Gallaspy.
Next on the program, Janet Kesterson presented an interesting and informative talk on the highlights of the 1920s. She described the events that shaped life in the 1920s including World War I, the 1918 influenza pandemic, passage of the 19th amendment, giving women the right to vote, prohibition and the Great Depression. She also discussed various aspects of popular culture — books, authors, inventions and food. Of special interest was the discussion of foods served in the 1920s. Refreshments selected for the reception was a popular dessert, and the Baby Ruth butterfinger and the Reese’s Peanut Butter Cups candies, which first appeared in the 1920s.
After the discussion of the 1920s, Lambert ready the history of Ingleside Literary Society written by Historian Brenda Coleman. Members of Ingleside Symposium and Ingleside Quorum were asked to share memories of their mothers’ experiences as members of the original Ingleside group.
At the conclusion of the program, Chairman Goff thanked the members of Centennial Committee and recognized member Kesterson for her many contributions to the success of the reception and program. The dream of a centennial celebration would not have been realized without her hard work, dedication and vision. After the blessing, guests were invited to enjoy refreshments and pursue the yearbooks and scrapbooks on the display table.