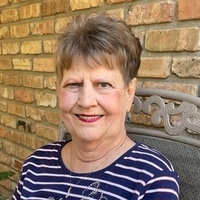 Sharon “Kaye” Moran Callender passed away peacefully at St. Tammany Hospital on Dec. 1, 2022. She was just shy of 70 years old. She was born on Jan. 7, 1953 to Eula and Vincent Moran, the youngest of three children.

She was preceded in death by her brother, Steve Moran, as well as her mother Eula Duncan, her father Vincent Moran, and stepfather Ephraim “Bud” Duncan. She is survived by Earl, her husband of fifty years, her sister, Diane, her children, grandchildren, and many other family members.

Kaye spent the early years of her life starting a family. She had two children, Amy Ladner (Ryan) and Casey Callender (Angela). She was an impeccable homemaker and always had a hot meal on the stove with a dessert to follow. When her children were young, she started a daycare. She was affectionately known as “Kaye Kaye” to half of the children in Washington Parish. They spent hours being ridden on her golf cart around her yard.

She later went on to become known as “Nanny” to her four grandchildren, Hunter, Ashton, Brady, and Emma who were her greatest accomplishments. They treasure countless hours spent at Nanny’s house, exploring the outdoors, and being served their favorite home-cooked meals. Their parents always had to coax them to leave. As her grandchildren grew older, she and her sister Diane became inseparable. They spent many hours together and you could likely find them having lunch at The Golden Pear.

In her later years, she experienced various health problems, but you could never keep her down. She developed an affection for baby goats and somehow convinced Earl to start a goat farm in one of his rare weak moments. She could often be found loading up her own walker into the backseat of her car and heading to Walmart. If you couldn’t find her there, she was probably at Sonic ordering a breakfast burrito which she insisted was low in sodium. Her family never had to worry because they knew she would always be home in time for the “Wheel of Fortune.” Her children explained many times that she could watch “The Wheel,” as she referred to it, anytime she wanted with the advances in television streaming, but she was never one to experiment with technology.

Kaye spent as much time as she could with her sister, children and grandchildren, tagging along on as many trips as possible. Some of her favorites were days at the casino with her favorite child or church and Sunday dinners with her second favorite. All of the grandchildren were her favorites, and it was no secret.

Kaye could never be found without her makeup and hair done. Even a trip to the ER warranted “putting her face on” and may have included one of her favorite leopard print shirts.

She was a wife of over 50 years. She was a lifelong caregiver and taught her family how to keep a spotless house and serve a delicious meal. She hosted countless holidays. She gave out her opinions as if they were gifts, whether you wanted them or not. You never had to wonder what she was thinking.

The world will be a strangely quiet place without her. She will be sorely missed. Especially by her children and grandchildren who won’t know what to do without her unsolicited advice.

A service in celebration of Kaye’s life will be held Saturday, Dec. 3, 2022 at Poole-Ritchie Funeral Home. Visitation will begin at 10 a.m. followed by a service at 2 p.m.