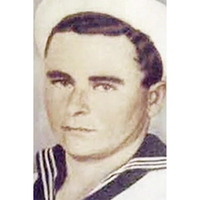 During this time in our country’s history, pride for America ran high and Houston felt it was his duty to serve his country and serve her well. So, on July 31, 1940, at the age of 22, he traveled to New Orleans, LA, and enlisted in the United States Navy.

Soon afterward, he started his naval training in San Diego, Calif., and was assigned to the U.S.S. Oklahoma (BB-37), a Nevada-class battleship with a length of 583 feet, and 2,166 sailors and marines manned the battleship. Houston would have been trained in naval drill duties, steering, and signaling, as well as standing watch and proper gunnery usage.

From Dec. 1941 to June 1944, The Department of the Navy buried the remains of the sailors in the Halawa and Nu’uanu Cemeteries. In September of 1947, the American Graves Registration Service (AGRS) was tasked with the recovery and identification of fallen U.S. personnel and disinterring the remains from the two cemeteries. Eventually, the American Graves Registration Service buried the unidentified remains of the sailors in 46 plots at the National Memorial Cemetery of the Pacific, commonly known as the Punchbowl, an expanse of a volcanic crater, located in Honolulu, Hawaii.

In 1966, Seaman 1st Class, Houston Temples was memorialized on the Tablets of the Missing and was awarded the Purple Heart posthumously. His mother, Dixie Sheridan Temples, kept the Purple Heart always near her until she died in 1974.

In June 2015, in hope of identifying the fallen sailors, the Deputy Secretary of Defense directed the disinterment of the unidentified sailors buried at the The Punchbowl, Honolulu, Hawaii. However, Shelton Temples and his children had already donated their DNA to help identify Houston’s remains. Then, on April 16, 2021, Houston Temples’ body was identified and will be interred, with full Military Honors, in The Veteran Section of Ponemah Cemetery, Bogalusa, LA, on Dec. 7, 2022.

A processional to Ponemah Cemetery will be from 1:45 p.m. until 2 p.m.

Graveside full military honors, veterans section will be at Ponemah Cemetery at 2 p.m.

To view and sign the guestbook for the Temples family, please visit pooleritchiefuneralhome.com.