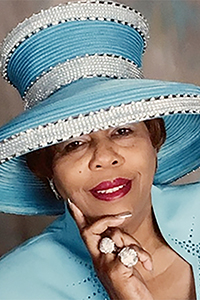 Clementene Lee Esther Rivers Lamin, affectionately known as “Tina,” was a beautiful, classy and impressive woman. She had a vibe that made her well-loved everywhere she went.

She taught Home Economics in St. Paul, Minn., for 36 years. During her residency, she was a faithful member of Mt. Olivet Missionary Baptist Church. She was a long-time Sales Consultant for Mary Kay Cosmetics. Her membership included: Home Economics of Minnesota, Home Economics of America, Retired Teachers of America, Retirement Club of St Paul and a frequent volunteer for Urban Partnership and Community Development, Council on Aging and Volunteers of America. For many years, she graced the stage as a full-figured model for companies such as Roaman’s, Catherine’s and Woman’s World.

Tina moved to Garland, Texas, in 2008 to be closer to home. She united with Mt. Hebron Missionary Baptist Church and continued to use her degrees by volunteering at Mt. Hebron Academy. She enjoyed working with students and watching them grow from Alpha to Infinity until her health began to fail. For reasons only known to our creator, Tina decided to move back home in March of this year. She wanted to reunite with her daughter and family.

She enjoyed hobbies such as reading, decorating, traveling, coordinating fashion shows, aesthetics, and clothing. She lived to the fullest her bucket list by being baptized in the Jordan River.

She was predeceased by her parents, Clinton L. Rivers and Amanda Abrams (Welbert) Carter, and sister, Mary L. Rivers.

A memorial service will be held Saturday, Nov. 19, at 1:30 p.m. at Crain and Sons Funeral Home in Bogalusa, with the Rev. Darrel Self officiating.