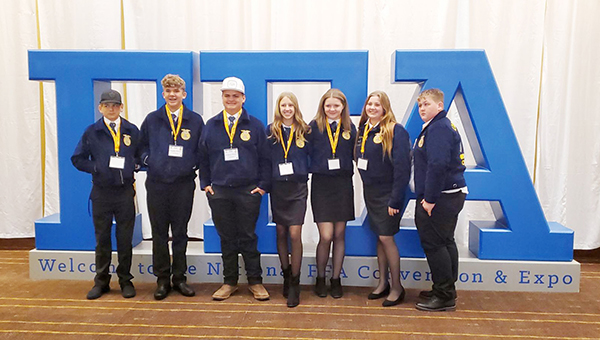 From Wednesday, Oct. 26, through Saturday, Oct. 29, FFA students from Ben’s Ford Christian School were able to attend the national convention for the organization.

“Learning to do, doing to learn, earning to live, living to serve.” That is the FFA motto, these words are not only spoken verbally but shown through our actions. As FFA members we strive to make a positive difference in the lives of others by developing potential for premier leadership, personal growth, and career success through agriculture education.

Once a year, a National FFA Convention is held. This convention allows FFA members across the nation, Puerto Rico, and the Virgin Islands to all come to one place for one week, not only to learn how to better the world through agriculture but also to have fun while learning. This year the convention was held in Indianapolis, Ind.

It was a 13-hour drive to get there but aching muscles and crowded vehicles were totally worth it. This convention is an opportunity of a lifetime. The things we learned are things you won’t learn in a classroom, hands-on activities and interactive workshops taught us problem-solving, entrepreneurship, leadership, animal sciences, agribusiness, crop science, and biotechnology. There was so much to learn.

Not only did we learn, but we had fun. There were over 69,000 middle and high school FFA members at the convention. There are 10,000 people in Bogalusa, and we talk to very few of them, but at the national convention we talked to everybody because being around people who have the same interests and passions gives us something to talk about. The more people we talked to, the more friends we made. These are people who we will know for a long time, and people who can help us succeed in the future.

Every morning we had an early start, ate breakfast, and got moving. On Tuesday we drove all day until we got to Bowling Green, Ky. On Wednesday we left early that morning to finish our drive to Indianapolis. On the way there we stopped at the Ark, and it was incredible. Seeing in person what Noah did with the tools he had, no man could do that without God. Seeing the way they had to live for over a month, made me realize how much we actually take for granted. It was a beautiful opportunity and we are so thankful for it. After we left the Ark we finished the drive to Indianapolis. Once we got there we stopped at St. Elmo’s Steakhouse where we had the best steak we had ever eaten, and learned about the trademark genetics that the restaurant has for its source of beef. We left the restaurant and walked around the convention to get familiar with the area for the next day.

On Thursday, we woke up super early and headed to the convention center. We attended the opening assembly where Tamika Catchings taught us about being bold. As a four time Olympic gold medalist and an WNBA all-star, her hearing disability wasn’t able to keep her from succeeding. We spent the rest of the day at the convention center going to all the booths at the expo learning and trying to win educational games. We got to do hands-on activities that helped us learn but also helped us be social.

Friday was another early morning and an amazing day at the convention center. We visited collegiate booths, learning that there are like-minded people all across the country. We visited the Hall of States, exploring agriculture in all of the states and outlying territories. Our favorite was Hawaii. The amount of agriculture that exists in an otherwise “vacation”-renown state, is staggering. After we left the convention center we visited the National FFA Headquarters and learned about the history of FFA, and it made us appreciate what FFA stands for and what we represent as members. After learning some history we went to the Indianapolis Motor Speedway. We got to ride on the tracks, kiss the bricks, and learn about racecars. After the events were over we headed back to Bowling Green to cut down the rest of the trip back home. Saturday we unfortunately finished the drive home.

The National FFA convention was worth every effort it took to get us there. We wouldn’t trade that experience for anything, ever. We have never had more fun doing anything. This is our first year in FFA and throughout this year especially at the National Convention we have grown to love agriculture. To us agriculture is no longer a class in school, but a passion. I would encourage everyone to join FFA and attend the National Convention for yourself, to develop your potential for premier leadership, personal growth, and career success!

This article was written by Brad Cooper, who is in the agriscience department at Ben’s Ford Christian School.