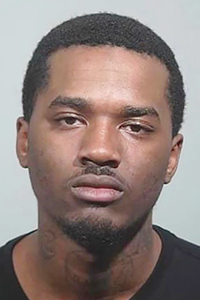 Early in the investigation into the Aug. 23 murder of Veronique Allen, Bogalusa police identified Christian Myers as one of the suspects, according to Maj. Wendell O’Berry of the Bogalusa Police Department.

BPD detectives obtained warrants for his arrest for principal to first-degree murder, principal to assault by drive-by shooting, and principal to illegal use of weapons.

O’Berry said that Myers lives in Houston, Texas, but has been attempting to evade police since the murder. He was entered into NCIC, a national database of wanted persons.

“Being a creature of habit, Myers couldn’t stay out of trouble anywhere,” O’Berry said.

On Tuesday, Myers was involved in an altercation in Scarborough, Maine, according to O’Berry. Police were called to a business due to a disturbance, and Myers was reportedly identified. Police ran his name through NCIC, and Myers’ time on the run came to an end.

He was arrested by Scarborough Police as a fugitive from Bogalusa, and the BPD was notified. Myers must go through extradition proceedings, and will then be brought back to Louisiana to face charges, O’Berry said.

“The investigation is ongoing, and it is believed at least two other suspects were with Myers when Allen was shot,” he said. “Results of forensic evidence is pending, and may reveal the identity of the other suspects. We will update the public when Myers arrives in Bogalusa, and is arrested on the warrants.”