Bogalusa will play at home on Friday 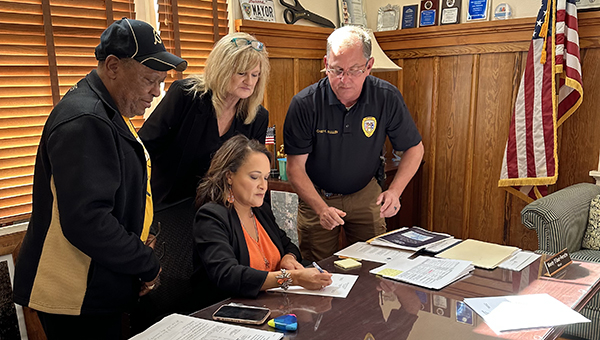 After appeals from Bogalusa Mayor Wendy Perrette, education leaders and law enforcement professionals, the Louisiana High School Athletic Association reversed its decision from last week that would have moved the Bogalusa High School Lumberjacks’ final game of the season to a “neutral” location.

On Monday, Perrette, Bogalusa Police Chief Kendall Bullen, Bogalusa Superintendent of Schools Lisa Tanner and others signed an agreement that puts a security plan in place for athletic events at BHS. The LHSAA had based its previous decisions on safety concerns.

“I’m very happy we’ve been able to reach an agreement that allows our Lumberjacks to play their final game at home, and to celebrate Senior Night with their peers,” Perrette said. “I appreciate how swiftly community leaders came together to make this happen, and I’m grateful to the principals of District 7-3A for their willingness to quickly reconsider the decision.”

Bogalusa, which currently has a record of 7-1, will host Albany High School this Friday at 7 p.m.

The LHSAA said, in a statement released Monday, that it “recognizes the simple majority vote of the District 7-3A committee meeting to relocate the Nov. 4 varsity football game between Bogalusa and Albany back to Bogalusa. There was not an appeal to this office; the decision was made by the District 7-3A committee.”
The LHSAA had announced the previous decision on Thursday, Oct. 27, apparently in response to a Friday, Oct. 14, incident in which gunfire was exchanged outside the Bogalusa football stadium during the homecoming game against Jewel Sumner.

Jerry Smith, 15, of Covington, was killed outside the stadium following a three-person shootout. The game was called in the middle of the fourth quarter, with Bogalusa leading 46-27 at the time.

Tanner provided The Daily News with a detailed statement expressing the rules that attendees for Friday night’s game will need to follow. The statement is as follows:

“As the superintendent of Bogalusa City Schools, I would like to thank the community for standing up for our students and athletes concerning the Bogalusa vs. Albany game this Friday night. I would also like to thank the principals from the 7-3A district for their votes to allow us to play our last game at home. We have been preparing for the game with the utmost safety precautions in place to ensure that our stadium is safe for the ballgame. There are going to be several new rules that we must all follow for attendance in the game this week and the weeks after. This will become common for all of our athletic events. These new rules are as follows:

This is a listing, although it may not be comprehensive, for the game Friday night. It is subject to change.

We hope to see you Friday night at 7 p.m. in the BHS Lewis V. Murray Stadium. Come early, it will be packed! Go Jacks!”