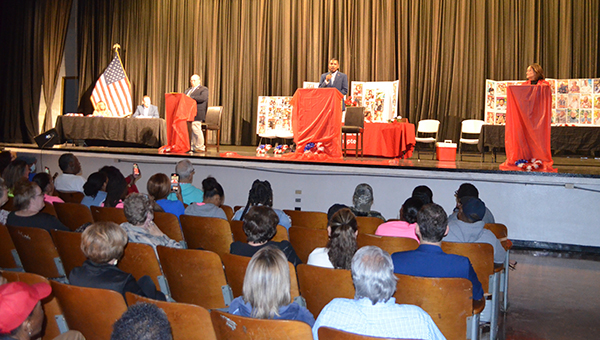 Bogalusa mayoral candidate Tyrin Truong speaks during Monday’s AARP Bogalusa-sponsored candidate forum, as Teddy Drummond, left, and Mayor Wendy Perrette listen. At the far left on the stage are AARP Bogalusa president Emma Dixon and forum moderator Chuck Hughes. The event was held at Bogalusa High School and lasted a little more than an hour and a half.

The three candidates for Bogalusa mayor spoke to about 100 citizens who attended a forum at Bogalusa High School on Monday night, as the candidates attempted to prove they were best for the job, one day before the beginning of early voting.

The forum was sponsored by AARP Bogalusa, with support from The Daily News and Bogalusa native and attorney, Charles “Chuck” Hughes. Hughes served as the moderator for Monday night’s event.

Each of the three candidates, incumbent mayor Wendy Perrette and challengers Tyrin Truong and Teddy Drummond, were asked six questions and given the opportunity to make an opening statement and closing statement. The event lasted about an hour and a half.

Other supporters of the forum included the Dr. A.Z. Young Foundation, the historic Bogalusa Voters League and the Washington Parish NAACP.

Early voting opened Tuesday, Oct. 25, and will continue through Tuesday, Nov. 1, except for Sunday, Oct. 30, from 8:30 a.m. until 6 p.m. each day. The early voting locations in the parish are Northshore Technical Community College in Bogalusa and the parish courthouse in Franklinton.

Election Day will be Tuesday, Nov. 8.

Question 1. What are your thoughts on the recent Bogalusa audit findings, and would you ever support asking the citizens to vote on new taxes to fund your projects or priorities?

Question 2. How would you address the increase in crime in Bogalusa?

Question 3. How would you improve the economy, both by utilizing the industrial park, and bringing in new business of all sizes?

Question 4. How would you cooperate with members of your city council, as well as other governmental representatives and agencies?

Question 5. How would you respond to issues of the city’s appearance, including blight, recreation and parks, and outdated infrastructure?

Question 6. How will you be a mayor for all citizens, even those who did not support you in this election?