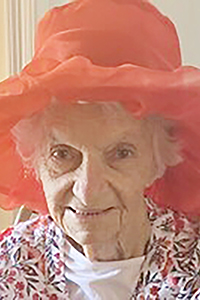 Barbara “Bobbie” Lynn Fontenot Corcoran passed away at the age of 91 on Sunday, Oct. 16, 2022, at her daughter’s home in Baton Rouge, surrounded by her children.

Barbara was born to Herbert and Lula Fontenot in Washington, Louisiana, on April 11, 1931.

Barbara grew up in Ville Platte, where she graduated from Sacred Heart Catholic School. Upon graduation, she moved to Lake Charles to attend secretarial school and start her career.

Barbara met Mack Corcoran, who was stationed at Fort Polk. Mack and Barbara were married on March 1, 1952, and moved to Bogalusa in early 1955. Barbara and Mack were longtime residents of Bogalusa until their health necessitated a move to their daughter Paige’s home in Baton Rouge in June of 2020. Mack and Barbara were married for 68 years before Mack’s passing on Jan. 2, 2021.

Barbara retired from the City of Bogalusa as a long-time employee of the Department of Public Works. Barbara was a member of Annunciation Catholic Church, The Bogalusa Country Club, and an avid ladies’ league bowler in her younger days. Barbara also assisted her husband Mack with his Lions Club Charitable Bingo duties. Since her retirement, Barbara has kept busy with her children, grandchildren and great-grandchildren who live all over the country and world, always making sure everyone was okay, wherever they were. She would assist when needed at Modern Finance Company, where her husband, Mack, was Manager and Co-owner. She enjoyed playing in her Bridge Groups, Pokeno Group and going to the Mississippi gulf coast, where Barbara and Mack enjoyed meeting with friends.

The Family would like to thank all of those who kept Barbara in their thoughts, prayers and constantly checked in on her after her move to Baton Rouge. Special thanks to Bobbie Louise Harvey and her family. We are forever grateful to Shirley Burnet of Above and Beyond LLC, of Baton Rouge and her sitters Angela, Ella, Liz, Barbara and Melinda who took great care of Barbara.

Funeral arrangements are being handled by Poole-Ritchie Funeral Home.

The funeral service will be held at Annunciation Catholic Church on Saturday, Oct. 22. Visitation will be from 9 a.m. until 11 a.m., with funeral services beginning at 11 a.m.

Burial will be at Hillview Memorial Gardens, immediately following the funeral service.