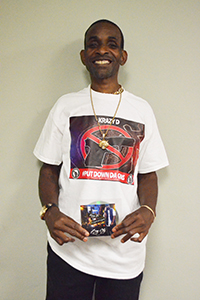 Walter Levi, also knwn as “Krazy D,” shows off his CD as well as a T-shirt showing the “Put Down Da Guns” message in one of his songs.

Walter Levi, who performs hip hop and rap music under the stage name of “Krazy D,” hopes that his latest song will have a positive message for young people in the community.

Levi’s latest CD, “Bog City Volume 1” contains the song “Put Down the Guns” as number 6 on its set list, as well as another track titled “Jesus Walk With Me.”

The CD is available online for $10 plus shipping, at the website www.shadowmanpromotions.com. “Shadow Man,” better known as Thomas Kates, is Levi’s promoter.

Levi has also turned the title of the sixth track, “Put Down the Guns,” into a public awareness campaign. He currently is selling T-shirts but also plans other activities based on the theme.

“I felt like somebody had to speak up in our community,” Levi said. “God put this on my heart. I’m just praying that at least one kid listens to it. If I can reach just one kid with this positive message, then I’m good. It’s about saving lives.”

Levi said that he has always been concerned about violence in the community, especially among the youth. He noted that it seems the problem has only gotten worse in recent years.

“Put Down the Guns,” he said. “It’s a simple message, and hopefully we can build off it and do even more for our youth.”

Levi said that he has been rapping since he was 15 years old and has made several recordings. His first single was “Slide Jumpin’ Bounce.” He graduated from Bogalusa High School in 1995.

Levi said examples of his music can also be heard on Facebook, Youtube, Tiktok and other social media by searching for “Krazy D” or “Walter Levi.”

“I really feel like this song was just a message from God, and I wanted to share it with the young people,” he said. “I wanted to be a leader and show them that there’s a better path for their lives.”