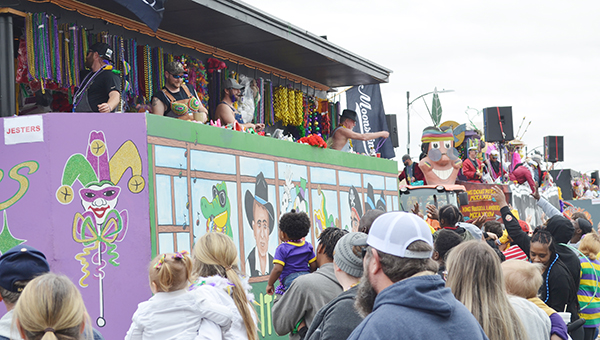 Revelers enjoy the fun at the MCCA Mardi Gras parade earlier this year. The new king and queen will be announced in late December.

The Krewe of MCCA invitations for the nominations for Royal Court membership positions were mailed to all MCCA Krewe members via U.S. Mail during the last week in September. This certainly signals the beginning of the 43rd season of the “Carnival in the Forest.” As clearly indicated in the nomination form, nominations of young people to serve in our Royal Court may be made by any active Krewe Member.

Selection of Court members is not a purely democratic process. Nepotism within the organization is given highest priority in court participation, and the selection priority is first given to children of members, then grandchildren, then nieces and nephews. If any member failed to receive a form, please contact the Captain for a prompt re-send. The nominations deadline is Oct. 20.

Bands — We have signed outstanding dance bands for both the MCCA Royal Court Presentations event in December, and for the Coronation Ball in February! For the Dec. 30 presentations and Revealing event, we have “Patrick Henry,” a great Showtime Band, whom you surely remember from our 2022 Ball. Then, we will present “Lost In The Sixties,” a great group who plays the hits from the 60s including the Beatles, Hollies, Beach Boys, Paul Revere and the Raiders, and more, to perform at our Coronation Event on Feb. 11, 2023.

As we launch MCCA’s brand new Carnival Season, we send a big sincere bow, and a salute, to our marvelous retiring King and Queen, Johnny “Be Good” Passman, and Teresa Wascom! You were both splendid, and unforgettable royalty!

Georgia and I, and the officers of MCCA, sincerely hope that you have enjoyed a healthy and happy summer, and we look forward to sharing a great MCCA — the 43rd season — with you all.

This article was written by The MCCA Captain, for The Daily News.