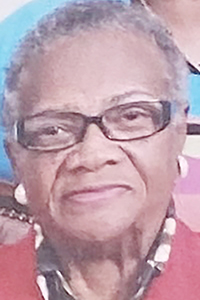 “Who plucked that flower,” cried the gardener, as he walked through the garden.

His fellow servant answered “The Master” and the gardener held his peace.

Mrs. Ersie Dee Owens Pittman was born Aug. 12, 1928, to Eli and Annie Marie Owens in Walthall County, Miss., but in the early morning hours of Oct. 7, 2022, the Angel of death came and whisked the spirit of Ersie away to a land free of pain and sorrow at age 94.

Early in life Ersie lost her mother, but found comfort, security and love in her uncle and aunt, Herman and Ella Mae Owens, who encouraged her to join Mt. Bethel Baptist Church in Sandy Hook, Miss., while very young. As education was limited for Blacks when Ersie was young, she moved to Louisiana after graduating from eighth grade to expand her learning and she completed a high school education at Wesley Ray High School in Angie. Her quest for knowledge and hatred of the cotton fields, led her to attend and graduate from Grambling State College, (now Grambling University), in 1953. Her ongoing search for knowledge pushed her to obtain a Master’s degree from Southern University in Baton Rouge, and Plus-30 additional educational credits from Southeastern Louisiana College in Hammond.

While in Angie, she met and married Zebedee Pittman. To this union four children were born. Ersie joined Mt. Zion Baptist Church under the leadership of Rev. B. B. Moses. She worked in many departments until she was unable to complete the physical tasks assigned to her.

Ersie was an educator extraordinaire, expanding the minds, hearts and imaginations of countless young people, first in Washington Parish and then for 29 years in the Bogalusa School system. She challenged her students to learn new things, think outside-the-box and strive to become productive citizens of society. Ersie returned to teaching after retirement until health issues forced her to permanently leave her beloved profession.

A memorial visitation will be held at Cook-Richmond Funeral Home in Bogalusa from 2 p.m. until 5 p.m. on Friday, Oct. 14. Funeral services will be held at Mt. Zion Baptist Church in Varnado on Saturday, Oct. 15, at 2 p.m.