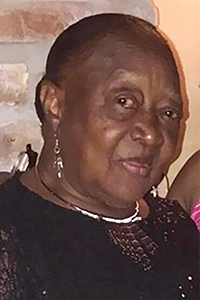 Jewel, as she was affectionately known by family and friends, was born in Poplarville, Miss., to the union of Robert and Revie Connerly Byrd Lampley on Sept. 17, 1944. She was the second child born to this union.

She moved to Bogalusa at a young age, where she was reared by her grandmother, Lucy Jordan. She united with Second Missionary Baptist Church where she grew her faith and loved the Lord.

She was a dedicated member of Central Memorial High School Class of 1962.

She later met and married Terry Donald Vernon in February of 1983.

Jewel went on to work with the Bogalusa City School system for many years, and also, was a private sitter for many families.

Drive through viewing will be Friday, Oct. 7, from 4 p.m. until 6 p.m. at Crain and Sons Funeral Home of Bogalusa.

The funeral service will be Saturday, Oct. 8, at 1 p.m. at Crain and Sons Funeral Home Chapel of Bogalusa. Interment will be in Vernon Cemetery.