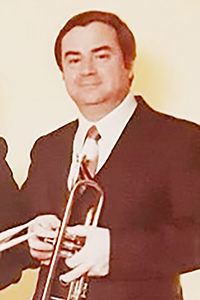 Lerue “Everett” Watson III will be honored on the Heritage Trail.

For the first time since 2019, the sights, smells and sounds of music fans having a good time will return to Cassidy Park, as the Bogalusa Blues and Heritage Festival kicks off Friday.

The festival was canceled in 2020 and 2021 due to the COVID-19 pandemic, but is ready to return better than ever in just a few days.

Inside today’s newspaper is a 16-page special section with plenty of information about the bands, food options, frequently-asked questions and much more.

No one will be allowed on festival grounds before these times (except paid campers, 5K Run participants, and festival officials and volunteers). Carry-on or tote bags are subject to search for contraband when entering the festival. Flash photography is not allowed.

When the fun and music concludes each festival day, organizers ask that everyone leave in an orderly and safe way.

The tentative schedule of performers is as follows:

For more information, see the special section inside today’s newspaper or visit the festival online at www.bogalusablues.com.

This year’s inductee to the Bogalusa Heritage Trail will be Lerue “Everett” Watson III.

Lerue “Everett” Watson III is known to many past Bogalusa City School students as their band director from Bogalusa Junior High School. Watson taught instrumental music in the Bogalusa School System at BJHS for 30 years, from 1959-1989. He earned his Bachelor in Music Education degree from Southeastern Louisiana University in 1959 and then his master’s degree from SLU in 1966.

Watson can play any musical instrument he picks up, but his instrument of choice is the trumpet. He began playing trumpet at BJHS and continued through Bogalusa High School under band director J.D. Fendlason.

During his teaching career, Watson had the privilege of teaching students who excelled in the music field and went on to become music teachers, band directors, and adults with an appreciation and love of music. Very seldom does a week go by that someone does not say to him, “Hey, Mr. Watson, do you remember me? I was in your band.” He may not remember their name but he will remember what instrument they played and in what chair they sat.

His love for music and the trumpet began a life of disciplined daily practice, a practice which opened opportunities for gigs with stage and dance bands. Throughout his music career he has played with bands across the Southeast, including Billy Fane and his Orchestra and the Langston-King Combo. He played with Johnny and the Music Makers (JAMM), which entertained many MCCA Mardi Gras krewe parties, Carl Conig’s Music Antiquim and the Big Easy Jazz Ambassadors.