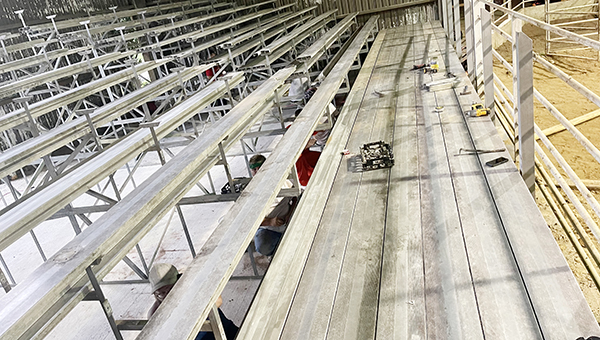 The aluminum bleachers were donated by Denham Springs High School in Livingston Parish, which recently replaced the bleachers at its football stadium. The plan is to eventually expand the bleacher seating to the entire arena.

When the Washington Parish Free Fair Capital Improvements Committee met early in 2022, it was presented with a list by Buildings and Grounds Chairman Jason Creel consisting of the most urgent needs to make the fairgrounds safer and more handicapped accessible.

Near the top of the list and needing near-immediate attention was the Rodeo Arena. Upon close inspection, the arena was revealed to have cracks in many of the cement bleachers, particularly on the northwest side (next to the street), plumbing issues, deterioration of the chain-linked fencing located throughout the arena and other problems much smaller in scale but nevertheless matters that needed to be corrected to assure the safety of those attending events in the arena.

The financial impact of the repairs was initially projected to be exorbitant. Luckily for the Fair Association, Creel has been able to address several of the most pressing issues thanks to Denham Springs High School in Livingston Parish.

At the end of football season in 2021, Denham Springs was slated to have its current football field replaced by turf. The aluminum bleachers at the stadium were also to be replaced. Creel’s family business, Creel Brothers Inc., owns the equipment to successfully relocate a portion of the bleachers to the rodeo arena. For most of the past few months, work has been underway to pour a new concrete base on the northwest side of the arena and the bleachers gifted to the fair have been reassembled.

No longer will folks have to worry about rodeo attendees standing next to the railings and blocking others’ views, nor will handicapped fans have to sit at the bottom of the bleachers. The new aluminum bleachers are raised from the ground with ramps and have designated handicap seating areas while the areas at the top of the bleachers are now backed with fencing that is in excellent condition.

For this year’s fair there will only be “new” bleachers on one side of the arena, but the long-term plan is to replace the other bleachers in coming months. Creel assured the committee that the existing bleachers on the fairgrounds side of the arena are in much better shape than those that have been demolished. There have also been improvements made to the plumbing in the arena and the likelihood of standing water beneath the bleachers has been eliminated.

With the replacement of wooden fencing and structures, the rodeo arena is ready for the 2022 fair. According to Creel, rodeo fans will have a much-improved, safer experience as they enjoy some of the best roping and bull riding of the year.

This article was written by Toni Tageant, who is a member of the Washington Parish Free Fair Association.