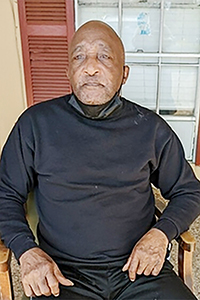 “For God so loved the world, that he gave his only begotten Son, that whosoever believeth in him shall not perish, but have everlasting life” (John 3:16).

On Saturday, Sept. 3, 2022, Melvin Lowe Sr. (Big Melvin), a native and resident of Franklinton, passed away with family. Melvin was the eldest of nine children born to the late Melton Lowe Sr. and the late Ada Hazel Lowe. Big Melvin was known and loved by many from Franklinton and the surrounding areas. He retired from Avondale Shipyards as a pipefitter for over 40 years. He loved gardening and the outdoors. Melvin Lowe Sr. was a member of Bethel Church of Christ Holiness U.S.A. At an early age, he entered into marriage with Doris Long Lowe, and to this union six children were born. Melvin and Doris were married for 52 years before his passing.

Viewing was Friday, Sept. 9, from 9 a.m. until 11 a.m., at Bethel Church of Christ Holiness, followed by the funeral service at 11 a.m., with Pastor Keno Spurlock officiating. Interment was at the Wilson Cemetery.