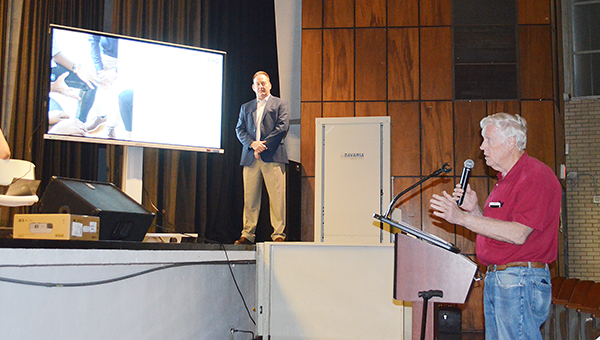 Brad Lewis of Bogalusa asks a question of Behavioral Health Group representatives at the town hall held Wednesday night at Bogalusa High School. BHG plans to operate a drug-treatment clinic in Bogalusa that will include the use of methadone. Moderator Chuck Hughes is shown looking on.

Representatives from Behavioral Health Group, Inc., visited Bogalusa on Wednesday to hear from citizens concerned about BHG’s plans to open an Opioid Treatment Program/Methadone Clinic facility at 412 Ave. B in Bogalusa in the coming months.

The meeting was held as a town hall format at Bogalusa High School’s auditorium. Originally scheduled from 5:30 p.m. until 7:30 p.m., the event eventually lasted three hours and 37 minutes. After a brief presentation from the BHG representatives, members of the public were permitted to ask them questions.

Amanda Karistai, regional vice president at BHG, noted that the company operates more than 100 similar facilities across the country, and has never had a single major complaint related to criminal activity.

“We want to make sure we are proud of our centers and they’re somewhere we would send our own families to,” she said.

Dr. Benjamin R. Nordstrom, chief medical officer at BHG, said that he completely understood the concerns of the public. He referred to a letter to the editor by Odie Hughes, which had been published in that day’s edition of The Daily News. Nordstrom said that he had no reason to doubt Hughes’ commentary that methadone clinics have led to problems in the past, but assured the roughly 100 people in attendance that his company did not have similar issues.

He said that BHG sees the medication — whether methadone, suboxone or other treatments — as only one part of saving an addict from destruction. These medications are prescribed for not only pain relief, but also as a method of treating opioid addiction.

Natashia Cheatham, regional director of operations for BHG, said that she grew up in a small town and appreciated the citizens’ concerns.

“I understand the need to protect the goodness and the integrity of communities (like Bogalusa),” she said.

Dwight Mussleman, senior vice president and chief development officer at BHG, noted that his company typically operates centers in communities like Bogalusa, because the opioid epidemic has had a considerable impact on rural America.

“Our industry has got a bad reputation,” he said. “I understand that. We’re different.”

Mussleman and the other representatives said that the BHG facility would be different because it would only distribute medication in the morning — likely from 5 a.m. until no later than noon. It would not be a 24-7 operating facility, he said. He also noted that BHG not only had procedures in place to prevent patients from distributing their drugs to others, but the company would also either fund security of its own or contract with local law enforcement agencies to provide extra security.

One common question heard from members of the public concerned whether it would be feasible to move the clinic to a different location. The BHG representatives said it would likely cost around $750,000 to do that, taking into consideration the costs of renovating and restoring the Avenue B location, getting out of legal obligations and lease requirements, and other related factors.

Mussleman noted that BHG already operates five facilities in Louisiana, and will also operate a future clinic in Houma. He provided a letter from the mayor of Lake Charles, stating that the company had been a viable community partner and never caused any issues. BHG also displayed a PowerPoint presentation listing positive testimonials from business owners who had businesses located near BHG clinics.

Mussleman and the other BHG representatives said they had never experienced public outcry similar to this in any of its other previous openings.

“Bogalusa is a place that’s not like anywhere else,” said the Rev. Travis Houston, pastor of First Church, in response.

Houston also asked if the business could move to a different site.

“I do not see a financial way that we can re-locate,” Mussleman said.

Stanley Scianna said that BHG was only coming to Bogalusa to make money, noting that if it was “great” then similar clinics would open in Covington and Mandeville.

“Why do we have to be the dumping ground?” asked Scianna, receiving applause from the majority of the audience members after he finished speaking.

The BHG representatives explained that the Louisiana Department of Health (LDH) identified Bogalusa (and Houma) as two of the worst-hit areas by the opioid epidemic, which is why the clinics would be opened in those communities. BHG was one of nearly 20 different companies that bid to operate the new facilities.

Mussleman said that BHG’s Lake Charles and Gretna facilities are just down the street from schools, and the vast majority of the company’s facilities are likely “within walking distance” of a church. Citizens have questioned the Avenue B location primarily due to its proximity to Annunciation Catholic School, Bogalusa High School, Annunciation Catholic Church, ESM United Methodist Church and the Bogalusa YMCA.

In response, BHG said that the location was attractive because of its proximity to Our Lady of the Angels Hospital and other medical facilities.

John Gallaspy was blunt, when it was his time to speak.

“Why do you want to be someplace that doesn’t want you?” he asked.

“We are here to respond to a public epidemic,” said Mussleman, noting again that BHG would work with the community to alleviate its concerns, but immediate re-location was unfeasible.

“We are not a methadone clinic. We are a health care facility,” Mussleman said. “Not having a treatment center here means more people will die. That’s not me being crass. The (statistics) are there.”

State Rep. Malinda White noted that LDH would hold BHG accountable, and if there are any issues the state could certainly pull the company’s license.

On Thursday, Bogalusa Mayor Wendy Perrette provided a statement to The Daily News, expressing her frustration with the way that the matter was handled from the beginning.

The clinic was originally projected to open by December, but BHG said that it would have to be much later now, pending any additional developments.