Cassidy: A hurricane like Ida will require long-term recovery 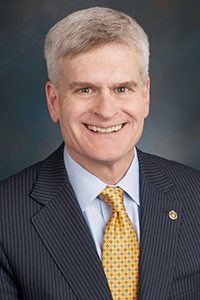 Approximately one year ago, Hurricane Ida dealt a heavy blow to Louisiana’s coast. Intense flooding overwhelmed communities. The Category 5 storm made landfall in Port Fourchon with maximum sustained winds of 150 miles per hour. The storm surge at Grand Isle was recorded at over 10 feet. Many of the families that made it out were forced to relocate across the South.

Unfortunately, Hurricane Ida was not the only recent storm to batter our coast and display our state’s infrastructure woes. In the fall of 2020, hurricanes Laura and Delta rocked Southwest Louisiana to its core, causing billions of dollars of damage and taking multiple lives. Despite the overwhelming devastation, and tireless work from our delegation in Congress, residents across South Louisiana are still picking up the pieces.

The destruction from Ida and recent hurricanes was yet another wake-up call that Louisiana needed to upgrade its infrastructure to make us more resilient in the face of future storms.

To achieve that goal, I became an author of the Infrastructure Investment and Jobs Act to ensure our state would get the resources it needs. Too often, Louisiana has been left out.

During the negotiations for this bipartisan infrastructure bill, I worked to secure three main priorities, among others, to make Louisiana better prepared for the next major disaster. One, the stabilization of our power grid to ensure reliable electricity even during extreme weather events. Two, improvements to our major roads and bridges to expedite future evacuation and relief efforts. And three, investments in flood mitigation and coastal restoration to protect residents from heavy rains and storm surges.

The legislation achieved all three objectives, representing a multi-generational investment in our coastal communities. Louisiana can expect to receive hundreds of millions of dollars for electrical grid improvements to reduce the frequency of life-threatening blackouts in the aftermath of a disaster.

We will receive $6 billion from the same bipartisan infrastructure bill to improve our roads and bridges. That is 60 percent more funding for roads and bridges over the next five years than we received over the last five. Not only will this improve daily commutes across the state, but it will also be essential to improve evacuation routes in high-risk areas and reduce bumper-to-bumper traffic when Louisiana families have to escape harm’s way.

Thankfully, there have already been major developments to improve flood mitigation. Earlier this year, it was announced that over $643 million will be allocated to our state from the bipartisan infrastructure bill to enhance our flood and hurricane protection systems. This included over $378 million for the critical Morganza-to-the-Gulf project to protect Louisiana from dangerous storms, a 3,000-percent increase in that project’s annual funding.

In addition to the infrastructure bill funding, I along with members of the Louisiana delegation have worked to secure billions in supplemental disaster assistance for Louisiana to bounce back from the last two years of storms that have battered our state.

Even a full year after Hurricane Ida made landfall on our shores, we still have unmet recovery needs including necessary housing assistance. There is still much work to be done.

Our communities across South Louisiana have proven their resilience through tough times. I will do everything in my power in Washington and will never stop working to ensure that local officials and residents have the tools they need to rebuild and protect their homes for generations to come.