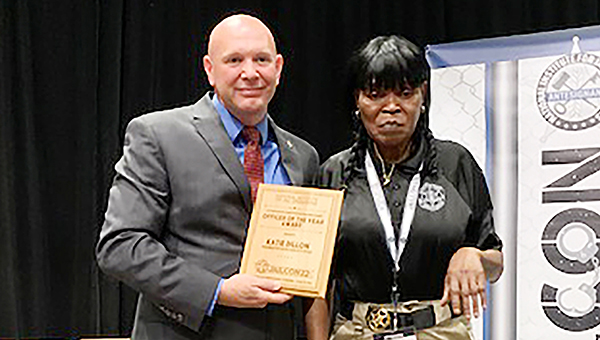 At the JAILCON Southern Regional Training Conference held in Huntsville, Ala., corrections deputy Katie Dillon was honored and presented a plaque by Tate McCotter, Executive Director of NIJO.

On Thursday, Aug. 18, Washington Parish Sheriff’s Office Corrections Deputy Katie Dillon was recognized by the National Institute for Jail Operations (NIJO) as Corrections Officer of the Year for the Southern region of the United States.

At the JAILCON Southern Regional Training Conference held in Huntsville, Ala., Dillon was honored and presented a plaque by Tate McCotter, Executive Director of NIJO.

In presenting the award to Dillon, McCotter stated, “Katie Dillon has been employed as a corrections officer with the Washington Parish, Louisiana, Sheriff’s Office since October 2017. She is a ‘no nonsense’ and ‘by the book’ officer who has the respect and trust of her fellow officers. She demonstrates integrity in all aspects of her job and is a positive influence for inmates. Katie currently serves as Shift Commander.”

McCotter quoted a Washington Parish inmate who stated, “If you don’t want to hear the truth, don’t ask her a question. Whatever you do, don’t lie to her. She has a way of making a Marine drill sergeant look like a paper doll. She can cut you to ribbons without putting a hand on you or raising her voice. She is a good lady and a good officer.”

A fellow corrections officer expressed the sentiment of the jail staff. “When Katie speaks, everybody listens. She runs this place and is quick to straighten us out if we are not doing the right thing.”

“I can think of no person more deserving of this award than Katie Dillon,” he said. “She is a hard-working and skilled officer who faithfully serves the Sheriff’s Office and all citizens of Washington Parish. It is an honor and privilege to have her as a valued member of our corrections team.”