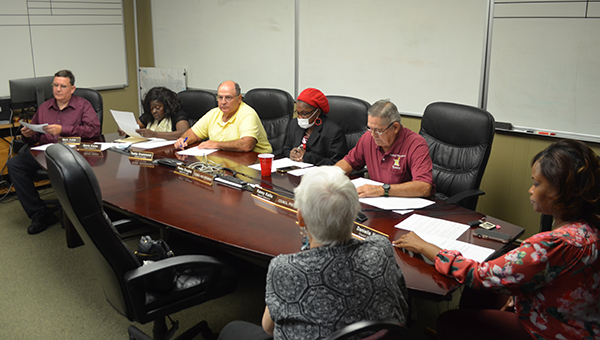 Bogalusa City Council member Gloria Kates reads the resolution placing a one-year moratorium on the creation of a methadone-treatment clinic in the city of Bogalusa, during Friday's called meeting.

In a called meeting Friday morning at the Bogalusa City Hall conference room, the Bogalusa City Council voted 7-0 to adopt a resolution placing an emergency moratorium on the location of a proposed methadone clinic.

On Wednesday, April 27, the Louisiana Department of Health announced such a clinic would be located at 412 Ave. B in Bogalusa. Methadone is a medication that is prescribed for not only pain relief, but also as a method of treating opioid addiction.

The moratorium will be in place no more than one year, in order to:

On Tuesday during a regular council meeting, several members of the public expressed their concern about the proposed Avenue B location, citing its proximity to churches, schools and the YMCA, and also stating that crime in the area would increase.

Bogalusa Mayor Wendy Perrette said Friday that although the moratorium’s language lists a timeline of one year, she would recommend the council act even sooner.

Perrette also said that representatives of the clinic’s operating company plan to be in Bogalusa in early September. A town hall meeting is proposed for Wednesday, Sept. 7, at 5:30 p.m. at Bogalusa High School, but that time and location have not been officially finalized yet.

During council discussion, Bogalusa City Council member Gloria Kates noted that the city does not reject the idea of a methadone clinic in a different location. Perrette said that she had spoken with the clinic’s operating company and they were willing to consider alternate locations as well.

The next regular meeting of the Bogalusa City Council will be Tuesday, Sept. 6, at 5:30 p.m.

The proposed clinic was the primary subject discussed during Tuesday’s city council meeting, which lasted a little less than two hours. It was not originally on the agenda, but was instead brought up by numerous members of the public.

Ricky Singleton, a South Augustine Street resident who also works at the YMCA on Avenue, said he has battled addiction in the past and knows what methadone and other drugs can do to people.

“You’re inviting troubled people into your town,” he said. “You’re bringing this into our city. You already have drugs in the city. Why would you put in more?”

Jay Schultz, whose Schultz Physical Therapy operates out of the same shopping center as the proposed clinic location, received applause from the standing-room-only audience after his remarks.

Schultz noted that his business’s clientele is often injured or elderly, and could have been easy targets for drug abusers that would visit the clinic.

“Good leaders do their due diligence,” he said. “Shame on you (the city council) for sitting on your hands in this situation.”

Kristy Smith, who has a child that attends Annunciation Catholic School near Avenue B, said that she was concerned a clinic would bring big-city problems to small-town Bogalusa.

“This will become New Orleans,” she said. “I moved here to get away from that.”

During Tuesday’s meeting, several city council members expressed their own concerns about the clinic, as did Perrette and Police Chief Kendall Bullen.

“We’re going to work with the state (to try to change the location),” Bogalusa City Council president Kenny Kellis said. “We don’t want it any more than you do.”

“I don’t want it here, either,” Bullen said.

The city council appeared to take the public’s concerns seriously, and by Thursday morning had announced Friday’s called meeting to institute a moratorium.

“The substance abuse epidemic in our community has reached a fever pitch that triggered state and federal support. As a direct result of our current and sustained substance abuse analytics, the Louisiana Department of Health is (setting) up a Methadone Clinic in the City of Bogalusa. As soon as the proposed location was brought to my attention, I leapt into action. This week, I have met with many of you to hear your valid concerns regarding the proposed site’s proximity to area schools and children’s programs.

“I feel your fears and anxiety and share your dedication to protect the most vulnerable among us. Rest assured that every effort is being made to rectify the location concerns while still providing this vital service to the people in our community who desperately need it.

“The Louisiana Department of Health is working with me, (State) Senator (Beth) Mizell and our city and community leaders to explore alternative options. Thank you for your prayers and passion as we discern what is best for the health, well-being and safety of all of our residents.”