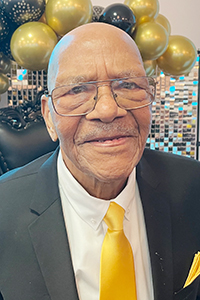 I will lift up mine eyes unto the hills “from whence cometh my help. My help cometh from the Lord, which made heaven and earth.” (Psalms 121:1-2).

Rev. Dr. Raymond Everett Mims Sr. made his triumphant transition to glory with his eyes looking toward heaven. Assuredly the angels rejoiced at his arrival to be with His Lord and Saviour Jesus Christ on Saturday, Aug. 13, 2022.

In 1956, Raymond Everett Mims graduated from Central Memorial High in Bogalusa. He continued his education at Southern University A&M, Baton Rouge, where he received a Bachelor of Science Degree in Recreation and Sociology. He also received a Bachelor and Master of Theology from the United Theological Seminary in Monroe.

Rev. Dr. Raymond E. Mims at an early age was baptized at the old Bethlehem Missionary Baptist Church located in “The Quarters” Bogalusa, under the leadership of Rev. Solomon Varnado. His Christian walk as a born-again follower of Christ began at his home church. He was a member of the Sunday school, Junior Choir, Saturday Night Prayer Band, Inspirational Choir and BYPU.

In June of 1978, Rev. Mims was called to pastor the Greater Ebenezer Baptist Church of Bogalusa. He served our church family untiringly and faithfully for 44 years. Pastor Mims trusted God completely and listened daily for God’s instructions. He was selfless, lived to please God and allowed God to order his steps. He was a great example of a man that followed God’s orders.

Pastor Mims served his country, the USA military in the Army Division. He received an honorable discharge. He was also a member of the M. W. Prince Hall Grand Lodge Free and Accepted Masons of Louisiana, 123 Wisdom Lodge in Bogalusa, LA, PHA.

In 1969 Raymond Everett Mims met Shirley Mae Humbles; they fell in love and were married on June 26, 1971. To this union there was a stillborn birth of a baby girl; Ramonica Mims.

He was preceded in death by his wife, Shirley Humbles Mims, daughter, Ramonica Mims; his parents, Ed and Hattie Mims; and six of his siblings; Gladys, Myrtle, Lester, Bernice, Dalton, and Donald; father-in-law and mother-in-law, Roy Humbles and Laura Vernon Humbles; and brothers-in-law, Chester Dwellingham and W.D. Humbles.