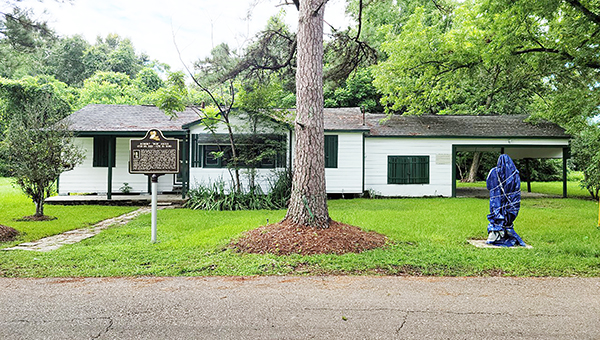 Shown above is the Robert “Bob” Hicks House, where a Louisiana Civil Rights Trail Marker (at right) will be unveiled Thursday morning, joining the already present State of Louisiana Historical Marker.

His office announced that the activities will begin at Bethlehem Baptist Church, located at 837 E. Seventh St. in Bogalusa, at 9:15 a.m. This marker will recognize one of the many locations in Bogalusa where civil rights activities took place during the 1960s civil rights movement.

The Louisiana Civil Rights Trail Marker will recognize one location in Bogalusa, the Hicks family home, where civil rights activities and lawsuits were planned and orchestrated and where civil rights activists were housed and treated. According to the Robert “Bob” Hicks Foundation executive director, Barbara Hicks Collins, the marker is recognition by the state of Louisiana that the work, the sacrifices and the dangers faced by the black community in Bogalusa and by everyone who helped in the 1960s was important to securing some measure of equal treatment for everyone that followed.

The event will begin with a continental breakfast at 9:15 a.m. at the Bethlehem Baptist Church gymnasium, followed by the presentation at 10 a.m. It is expected that Mayor Wendy Perrette and other elected officials will be in attendance. A few veterans of the civil rights movement are expected to attend and it is hoped that any others who are physically able will as well.

The general public is invited to attend.