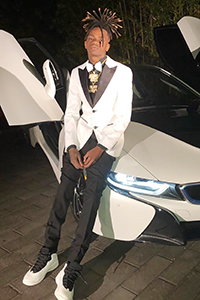 Javorius Tykies Scott known professionally as JayDaYoungan, was born on July 15, 1998, in Bogalusa, to Kenyatta Scott Sr. and Latisha Jefferson. He departed his life here on Earth on July 27, 2022.

He received his formal early education in the Bogalusa City School System. Jay attended Greater Ebenezer Baptist Church with his family — one of his most favorite past-times. Since his early years, Javorius enjoyed basketball, dogs, drawing, and writing music. As early as the age of 8, he began putting together his own rap lyrics, and he was destined to become the most successful rapper from the small town of Bogalusa.

In February of 2017, Javorius began a journey that led him to a life of recognition and fame as a rapper-taking on the newly formed image of JayDaYoungan. He released his mixtape “Ruffway,” and it became a regional success and gave him much local recoginition; his song “Interstate” broke 4 million views on YouTube in under a month. Following that project, JayDaYoungan issued the mixtape “The Real Jumpman 23,” consisting of 13 tracks. He then released mixtapes “Wake Up” and “Taking Off.” Jay’s first nationwide hit came with the song “Elimination” on the mixtape “23.” Subsequently following was the mixtape “Forever 23,” “Endless Pain,” “Baby 23,” “Touch Your Toes” and “23 is Back.” He was afforded the privilege to extend his reach into the commercial mainstream through collaborations with many well-known successful artists, including Lil Durk, Boosie, Kevin Gates, Big Llatto, Dej Loaf, YNF Lucci, Sean Kingston, YungeenAce, and Fredo Bang.

Funeral arrangements will be Sunday, Aug. 7, at the Bogalusa High School auditorium, located at 100 M.J. Israel Drive. Public viewing is from 10 a.m. until 11:30 a.m. No one will be able to stay in the auditorium during the viewing.

Doors will re-open at noon. The celebration will start at 1 p.m.

There will be no public viewing at the end of the services.

Affordable Funeral Home of Lacombe is in charge of arrangements.