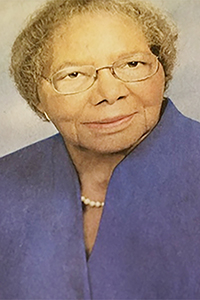 Luella M. Jackson transitioned to her eternal rest from Baptist Health Medical Center in Little Rock, Ark., on June 26, 2022, where she had spent her last days under the care of her daughter, Sandra Jackson Brown, and the competent staff there. She was an outstanding mother, community leader, educator, church member and friend, who positively influenced lives of everyone she met.

Born the sixth child of the late Teman and Floretta Mondy, Luella spent her entire life in Angie, the community she loved dearly. Her formative years were spent at Wesley Ray Elementary and High School from which she graduated. She continued her education at Southern University in Baton Rouge, where she received her Bachelor’s, Master’s and +30 certifications in elementary education.

Luella was employed by the Washington Parish School Board as a teacher at her former high school, Wesley Ray. During the initial desegregation of the public schools in the Washington Parish, Luella was one of the first African-American teachers to be reassigned to Thomas High School. Because of belligerent protest, Luella, along with the other African-American teachers, was transported to school each morning by federal marshals who were stationed outside her classroom door and who had to escort her to the restroom, cafeteria, and other parts of the school during the day. After several years, she had the opportunity to return to Wesley Ray Elementary where she served as assistant principal and first grade teacher. Luella retired in 1995 with 35 years of service.

Luella was married to the late Fred. W. Jackson for 48 years until his death on Oct. 27, 2001. She was also preceded in death by her daughter, Judy Kay Jackson; sisters, Roxie Roberts, Gracie Foster, Hattie Foster and Velma Nichols; and brothers, Otha, Virgil, Oliver and Freddie Mondy.

Though she is no longer with us, memories of Luella will comfort us and give us peace as we live without her.

A drive-thru viewing was held on Friday, July 8, from 4 p.m. until 6 p.m. at Crain and Sons Funeral Home in Bogalusa.

Funeral services were held at 1 p.m. on Saturday, July 9, at Wesley Ray United Methodist Church, 38019 Wesley Ray Road in Angie, with the Rev. Terrence August officiating. Interment followed at Wesley Ray’s Church Cemetery. Arrangements were under the directions of Crain and Sons Funeral Home of Bogalusa.