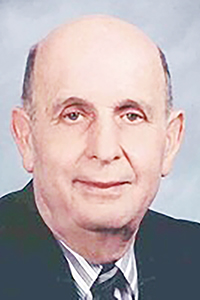 On Wednesday, July 20, 2022, Marvin (Pot) Owen Cantrell, loving husband, father, grandfather, great-grandfather, brother, and uncle, made his final ascent home to the Lord at the age of 90. Marvin died peacefully at home with his family.

Marvin was born on Aug. 23, 1931, to Eli and Nellie Cantrell. He joyfully served his community for many years as “the bread man” with Holsum. He retired from Holsum, but a few months later decided retirement was not for him. He went back to work for Brennan’s Vendworks, where he happily worked until he was 83 years old.

On Nov. 5, 1951, he married Barbara “Bobby” Boyd Cantrell. They were happily married for 69 years, and raised two children, Barbara Gayle and Paul Douglas Cantrell. Marvin served as a Deacon at First Baptist Church of Bogalusa. He was known for his kind and godly spirit and greeted everyone with a loving smile. He enjoyed serving his church family in many ways, but one of his fondest memories was serving alongside his wife as leader of the Royal Ambassadors for several years. Marvin was beloved by all who knew him. He was a man of great character, integrity, and humility. He loved his family and his community. He was a man of his word and incredibly generous. He found joy in serving and giving.

He is survived by his son, Paul Cantrell and his wife, Jenny; his grandchildren, James Pierce, Ashley Boudreaux and her husband, Brad; Megan Tykol and her husband Justin; Mandie, Julianne, and Dante Cantrell and his wife Kaylee; and his great-grandchildren, Arielle, Grace and Paul Pierce, Jax and Wyatt Boudreaux, and Reid and Austin Tykol. He is also survived by many nieces, nephews, grandnieces and grandnephews.

A visitation will be held on Sunday, July 24, at Poole-Ritchie Funeral Home from noon until 2 p.m., with the funeral service beginning at 2 p.m. Interment will follow at Ponemah Cemetery, immediately following the services. A reception will follow for the family, at First Baptist Church of Bogalusa.