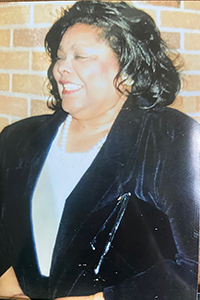 “To everything there is a season and a time to every purpose under the heavens” (Ecclesiastes 3:1).

Ms. Lee Audrey (Burnett/Ransfer) Cohea was born on May 14, 1930, in the city of Bogalusa to the late Solomen Ransfer and Eunice English. She transitioned from this life on July 11, 2022, peacefully at the age of 92 at Resthaven Nursing Home after a long illness.

Until her health would not allow, she was an active member of Saint Paul A.M.E. Church in Bogalusa. She was a lifelong member and at the time of her passing was the mother of the church. As a member and over the years she was a strong choir member and would often sing for weddings and funerals. Her late grandfather, Tom Pounds, was a founder of the church.

Although born in Bogalusa, she was raised by her father and stepmother the late Lenora Ransfer in Tucson, Ariz. That’s where she gets her love for all things Mexican and Indian turquoise jewelry. She had an exotic beauty and was often mistaken for a Mexican girl. As a teenager she went to Mexico with her father and best friend Westona and was denied re-entry by the border patrol, because they said she was a Mexican national. Her father had to travel back to Tucson to get her birth certificate before she was out allowed re-entry.

Although raised in Arizona, she often returned to Bogalusa to be around family on Lincoln Street. Man of her lifelong lessons came from her aunt affectionately called “Big Mama,” the late Lillie Pounds. Many of her critical comments of things started with “Big Mama said.” It was on Lincoln Street, while picking roses, that she met her husband, the late Collie Burnett Sr. of Varnado. From that union, she bore five children, Fortune, Collie Jr., Brandon, the late Costroma Burnett and Eunice Ransfer.

Lee Audrey lived a full life in service to her family. When her mother passed, she traveled from Tucson to Bogalusa by car to pick up her siblings (Eugenia, Anthony and Sherman) to live with her in Tucson. So, she raised eight children as a single mom after her divorce from Collie Sr.

She gave up her dreams of college (having attended Gambling) and as a poet. She loved to write poems.

Upon returning to Louisiana in 1965, she studied to become a nurse and worked at Baptist Hospital in New Orleans. That’s where she met her lifelong friend and fellow nurse, Ms. Gloria Cordia. Sisters for life. She moved back to Bogalusa in the late 70s.

She lived a full life and kept smiles on her family and friends’ faces with her humor an occasionally salty language. She was a firm person and took no prisoners. She believed in hard work and family. She was straightforward and worthy of respect. She was preceded in death by her mother, Eunice English; father, Solomon Ransfer; her beloved Aunt B, Lillie Pounds; her uncle, Eusby English; her uncle, Willie Davis; her sister, Eugenia Davis; her brother, Sidney Davis; her brother, Anthony Davis; her baby boy, Costroma Burnett; and former husband, Collie Burnett Sr.

She leaves to cherish her memories: her surviving brother, Sherman (Deborah) Davis of Slidell; her oldest son, Fortune Kelly Burnett of New Orleans, Collie Burnett Jr., of Bogalusa, Brandon Burnett of Atlanta, Ga., and daughter, Eunice C. Ransfer of New Orleans; her grandchildren, Adrian Ransfer, Christian Ransfer, Emily Burnett and Colin Taylor Burnett; great grandchildren, Ariel, Phoenix, Curtis, Hubert and Cloe; her beloved cousins, Calvin and Dorothy Johnson, who were like her children and provided support over the years; and a host of cousins and friends from Bogalusa, Slidell, Tucson, Atlanta and New Orleans.

Visitation will be Wednesday July 20, from 2 p.m. until 6 p.m. at the Cook-Richmond Funeral Home Chapel. The funeral service will be held Thursday, July 21, at 11 a.m. at St. Paul A.M.E. Church, located at 420 Church St. in Bogalusa. The Rev. Kerry James will be officiating. Interment will be in Duffy Cemetery.