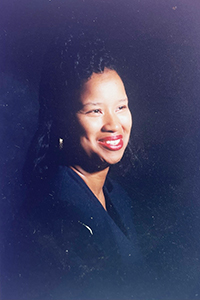 A loving mother and daughter, Sylvia Ann Harry, was called to rest on July 8, 2022. Sylvia was born on Aug. 31, 1965, to Gladys Harry and the late Earnest Harry Sr. She was raised in the Wesley Ray community, where she remained a faithful member of Wesley Ray United Methodist Church.

After high school, Sylvia attended Sullivan Vocational Technical School. She graduated with a trade as a Clerk Typist. Sylvia was employed at Wesley Ray Elementary for 27 years as a Paraprofessional, devoted to her Pre-K students who adored her. She was also employed at Pride and Hope Ministry as a caregiver.

Sylvia accepted Christ at a very young age. She served as president of the usher board where she guided the up and coming youth ushers. She also served as co-secretary for Vacation Bible School each year.