Pan Am flight crashed 40 years ago, 6 Bogalusans could have been victims 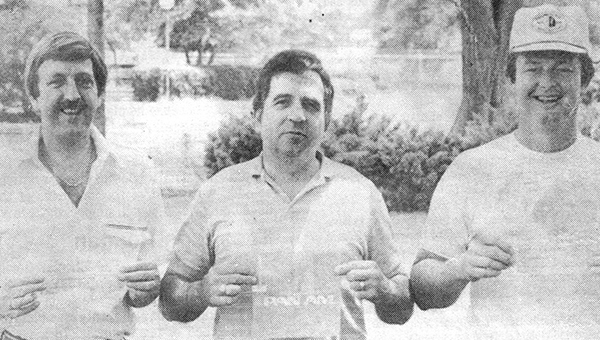 Don Spiers of Bogalusa still has the newspaper clipping, reporting that he was scheduled (along with five other Bogalusans) to be a passenger on the ill-fated Flight 759. These photos originally published in the Sunday, July 11, 1982, version of The Daily News. Shown are, left to tight, Jimmy Jenkins, Don Spiers and Terry Simmons. (Courtesy photo submitted by Don Spiers).

Saturday marked the 40th anniversary of the horrific crash of Pan American Flight 759 out of New Orleans.

On Friday, July 9, 1982, the Boeing 727 aircraft crashed shortly after lift-off from New Orleans International Airport in Kenner, after being forced down by a microburst storm mere minutes into its flight bound for Las Vegas, Nev. One hundred forty-four passengers and eight people on the ground were killed during the tragedy. The sole survivor was a 16-month-old baby. The crash had the highest number of aviation fatalities in 1982.

According to an article in the Sunday, July 11, 1982, edition of The Daily News (with the masthead of “The Sunday News”), six Bogalusa residents could have been victims of the crash.

At the time, Don and Georgia Spiers, Terry and Mildred Simmons, and Jimmy and Karen Jenkins, were all originally scheduled to be passengers on Flight 759 for a vacation trip to Las Vegas.

Two more people from Baton Rouge were supposed to join the six on the trip to Las Vegas, but the Baton Rouge couple changed plans and the Bogalusa group rescheduled their departing flights until later in the month. Don Spiers kept the ticket showing that he was scheduled to be flying on board the ill-fated aircraft, and shared it with The Daily News for a front-page photo to accompany the article.

Spiers and the two men in the group later used those tickets to board a Friday, July 16, flight — with a sticker attached to show the re-scheduling. That July 16 flight was also listed as “Pan Am 759.” At the wives’ request, the three women took a separate flight.

Spiers detailed the story in chapters 52 and 53 of his autobiography, The Boy From Bogalusa.

“Mildred very apologetically called me to say that her brother (one of the two from Baton Rouge) had had a complete change of heart,” Spiers wrote. “He had a long story wherein he was a dedicated beagle hound breeder and retailer, needed desperately to build some sort of expensive dog pen facility, and he had decided that he could not afford the trip to Las Vegas, as he needed to invest in his beagle dog pens. Georgia and I, and the Jenkins, told her that we would much rather go on the weekend nearer our anniversary date as we had originally planned, and she said that she would too.”

Spiers wrote that he first learned of the crash while driving in Mississippi listening to New Orleans WWL radio.

“A news bulletin broke into the broadcast announcing that Pan Am Flight 759 had just crashed on its take-off from the New Orleans International Airport in Kenner, Louisiana,” he wrote. “I quickly developed a strange ‘floating’ sensation and could not think. The moment seemed somehow unreal. Our tickets on this flight were lying on the table next to my bed.

“When I got back to Bogalusa, Georgia and I drove over to the Simmons’ home. The Jenkins were already there. It felt really strange. We hardly spoke to one another. I think that it felt a great deal like we had somehow been on the flight and had survived.”

Adding to the amazing circumstances, 22 months later, Spiers was summoned to serve on the federal jury charged with deciding the compensatory awards to the surviving families of the Pan Am Flight 759 victims. He was to report to the federal court in New Orleans at 8 a.m. on Monday, March 19, 1984.

Upon revealing that he was originally a passenger scheduled on the flight, U.S. District Judge Adrian Duplantier excused Spiers from serving as a juror in the case.