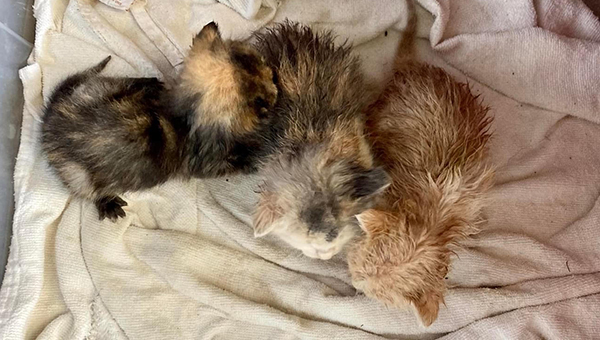 The Humane Society of Louisiana is offering a $1,000 reward for information leading to the arrest of the person or persons who left four kittens abandoned at the Washington Parish Animal Shelter on Sunday. (Courtesy photo)

The Humane Society of Louisiana (HSLA) and other agencies are asking for the public’s help in identifying the person or persons who left four kittens in a plastic tub in front of the Washington Parish Animal Shelter on Sunday, July 10.

The shelter had closed for the night. Bogalusa Animal Control Officer Tiffany Turner-Smith discovered the kittens on the morning of Monday, July 11, but by that time one of the kittens had drowned.

A rainstorm the night before dumped several inches of rain. The tub filled up with water, which almost submerged the kittens. One died in the tub, and the others were struggling to survive when Turner-Smith discovered them. Sadly, if the kittens’ previous owner had placed the tub under the awning near the front entrance, it would likely have prevented the water from collecting in the tub.

HSLA is offering a $1,000 reward for information that leads to the arrest of the person or persons responsible for abandoning the kittens. To contact the Humane Society, call 1-888-6-HUMANE (486-263).

All tips and leads will be shared with the Washington Parish Sheriff’s Department. The Humane Society is offering rewards as part of its “Stop Cruelty to Cats” campaign that was launched earlier this year. The campaign hopes to bring attention to crimes committed against felines, and rewards often induce people to come forward with information. The group hopes that more people will be held accountable for hurting or injuring cats — acts that often go unpunished.

The surviving kittens were exhausted, malnourished and covered with fleas. The Washington Parish shelter took the three surviving kittens, but it will take enormous resources to keep them healthy. The shelter will have to de-worm and de-flea them, have a veterinarian examine them, and get a foster parent to syringe feed them until they are old enough to eat on their own. Those willing to donate to their care can contact Kay Grantham with the Washington Humane Society. Kelsey Knight, Washington Parish Shelter Director, also urges all pet owners to sterilize their pets so they will help prevent the birth of more pets.

“I urge every pet owner to spay or neuter their cats and dogs. Almost every shelter in America is at or over capacity, and there is no end in sight,” Knight said. “The parish has effective low-cost programs, where you can spay or neuter your pet for about $80. If the owner of this cat had gotten her fixed, her kittens would not have been left in a plastic tub to fend for themselves, and one would not have suffered and died such a horrible death.”

According to the HSLA, abandoning any animal is a punishable offense, and penalties can range from six months in jail and up to $1,000 in fines.

Those wishing to support the Washington Parish Animal Shelter may also view its Amazon Wish List online at www.amazon.com/hz/wishlist/ls/29UEH0TYD3C4I?ref_=wl_share. To make a monetary donation for the care of the three surviving kittens, you can donate through the Washington Humane Society’s Paypal at washingtonhumanesocietyla@gmail.com. All donations are tax-deductible.

The Humane Society of Louisiana is one of the largest animal protection organizations in the state and operates the Enoch J. Donaldson Animal Sanctuary in Mt. Hermon. For more information, please visit its website at www.humanela.org or its page on Facebook at www.facebook.com/HumaneLA.