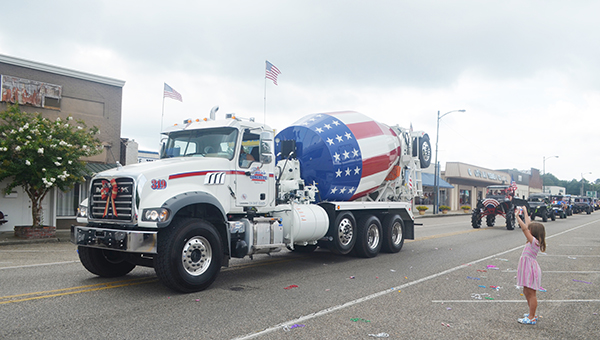 A young girl waves at a patriotically decorated truck during last year’s Fourth of July parade in Bogalusa. This year’s event is Monday, July 4, starting at 10 a.m.

Magic City Post No. 24 of the American Legion extends its invitation to one and all to attend Bogalusa’s Independence Day parade, which will be appropriately be held Monday, July 4, beginning at 10 a.m. on South Columbia Street.

The procession will follow its usual route, which the Legion explains is designed in an effort to make attendance as convenient as feasible for citizens throughout the city.

For the benefit of newcomers and visitors, it will follow the following pattern:

Movement northerly along Columbia Street will continue to and over the Columbia Street bridge and will then continue along Richmond Street to just past Zellco Federal Credit Union, making a left turn then onto Carolina Avenue and then intersecting and crossing Louisiana Avenue, continuing westerly on Carolina to the railroad crossing, then proceeding a long block westerly on New Superior Avenue followed by a left turn at Hardee’s onto Cumberland, with the parade then going over the Avenue B bridge and following a consistently southerly course along Avenue B past Annunciation Catholic Church and ESM United Methodist Church with a right turn at the Ball Park, and then a right turn onto Avenue F, and from there northerly to the end of Avenue F and the parade’s destination.

Legion spokesmen offered the following commentary: “The 50th anniversary of the Vietnam War is fast approaching, and the age and likely duration of our Vietnam Veterans is advancing at the same rate. While their war did not close itself down with a ceremony resembling the timeless magnificence of General Pershing’s climbing into a French railcar at the 11th hour of the 11th day of the 11th month in 1918 to bring the doughboys home; or of General MacArthur’s summoning the Japanese warlords to the U.S.S. Alabama in September of 1945 to accept their unconditional surrender — this conflict, the Vietnam War, involved the deaths of 58,281 and 1,626 MIA’s (American boys) and the lives and sacrifices of female nurses and support units. This conflict was not just a passing drumbeat in the distance. It was a stifling, choking and wallowing tussle in faraway mud, with some American prisoners of war held in Hanoi for as much as six years.”

It is in their honor, their remembrance, all of them, that we dedicate Monday’s parade.

Our congresswoman, U.S. Rep. Julia Letlow, will be with us in the parade, and we hope that her schedule will allow her to attend our following luncheon at the post in Lakeview, and we certainly invite her to give us an up-to-date report on events at our nation’s capital.

We cannot resist thanking the Rev. Larry Lassley, a good friend and loyal American, who, despite the fact that both he and Mrs. Lassley are confined with the COVID-19 virus, has posted an always timely adage on the Calvary Christian Fellowship premises:

“Remember our Freedom had a very high cost. Some gave all.”

What a marvelous summary of what we are celebrating on this coming date.

This article was written by John N. Gallaspy, for The Daily News.