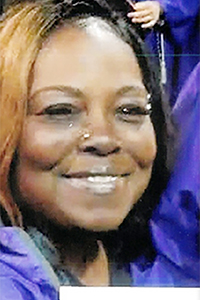 She united with Bethel Church of Christ Holiness at an early age.

She united in Holy wedlock to Mr. Timothy A. Brumfield, and to this union two sons were born.

She was preceded in death by one daughter, Keandra Brumfield; her father, James Royce Sibley; cousin, Philip Partman, Charles Watson, Willie Ray May and Peanut.

A drive-through viewing will be held on Friday, July 1, from 3 p.m. until 6 p.m., at Crain and Sons Funeral Home of Franklinton.

The funeral service will be Saturday, July 2, at 1 p.m. at Bethel Church of Christ Holiness U.S.A., with Elder Alvin Partman, pastor, officiating. Interment will be in Bethel Cemetery.