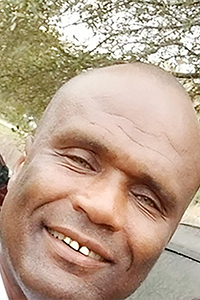 Travis Edward Davis was a gentle and kindhearted person. He was raised up in Mt. Bethel Baptist Church, under the leadership of Rev. A. L. Owens.

He was born on Dec. 27, 1972, at Charity Hospital in Bogalusa and attended Tulsa Job Corps in Oklahoma for carpentry. He passed away Wednesday, June 15, 2021.

He was born to the late Carolyn Davis and late Robert Taylor Sr. He is survived by one son, Aundre Mosely of Bogalusa; two brothers, Allen Davis Sr. of Bogalusa and Skylar Moses Sr. of Gulfport, Miss.; one sister, Caroloshia Davis of Meridian, Miss.; three aunts, Vevelyn (Johnny) Moses of Angie, Christopher (Will) Stringer of Dallas, Texas, and Julia Allen of Milwaukee, Wis.; and one uncle, Richard (Diane) Davis of Hammond. He was preceded in death by a host of nieces and nephews.

A drive-through viewing will be held on Sunday, June 26, from 1 p.m. until 3 p.m. at Crain and Sons Funeral Home in Bogalusa.

The funeral service will be on Monday, June 27, at Crain and Sons Funeral Home with the Rev. Christopher Matthews officiating. Interment will be in the Robinson Cemetery.