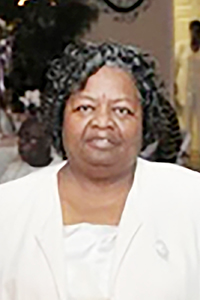 “I have fought a good fight, I have finished my course, I have kept the faith; henceforth there is laid up for me a crown of righteousness which the Lord, the righteous judge. Shall give me at that day and not to me only, but unto all them also that love his appearing” (II Timothy 4:7-8).

The end of this life is the beginning of a New life, for the better, for sweeter, without sickness, pain, sorrow, and most of all no death. Only by faith can we know this life, and this is the life we all look forward to.

Sister Henry Betty Jones James was born Jan. 17, 1946, in Independence, to the late Henry and Annie Lee Jones. She was a “Miracle Baby.” She confessed a love in Christ at an early age and joined church. She received her education at Vernon High School. She was a strong woman, worked hard, was a devoted mother, and looked to the Lord for daily guidance while meditating with her flowers. She trained and taught her children how to survive by putting God first. Most of all she wanted her children to know the Lord for themselves. She was loved and admired by all who knew her; however, God loved her much more. God saw that she had gotten weary. He whispered, “Betty, my dear child, come with me where there is no more suffering.” Her life faded away peacefully in the loving arms of Jesus on June 13, 2022, at her home in Mt. Hermon. On the 3rd day of November 1963, she was united in holy matrimony to Willie James Sr. To this union they were blessed with seven wonderful children — five girls and two boys.