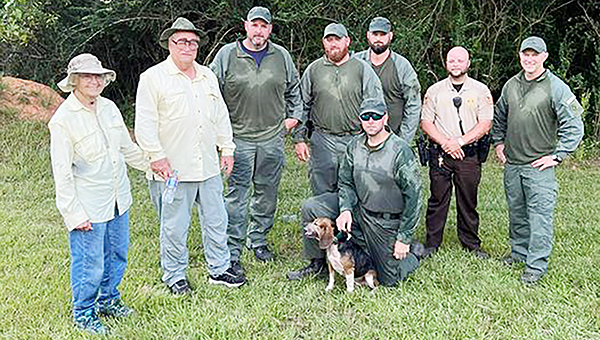 Henry Leissinger reported that his 75-year-old wife, Marilyn, had wandered off in a wooded area on their property and was lost, officials said. He said he had been looking for her about an hour. Officers responded to the scene and the dog team from Rayburn Correctional Center was notified to assist in the search.

The dog team arrived, and after tracking Mrs. Marilyn for two hours, she was found safe close to the vicinity of Brockdale Road, officials said.

“Rayburn Correctional Center’s dog team has always responded to assist us when requested,” said Walthall County Sheriff Kyle Breland. “They are diligent in their search efforts, whether it be a criminal suspect or someone in need. Thank you, again Warden Travis Day and Warden Keith Bickham for your assistance. I want to thank other agencies involved — MBN, MDWFP and Lexie Fire Department.”