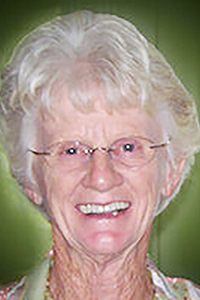 On June 13, 2022, Martha Elaine Wilson Nichols, the fiery redhead from Bogalusa, took one last glance at the scoreboard as the clock ran out and walked off the court to join family in the locker room on high: her parents Avis and Norman, sister Norma Ann, in-laws Bevie and Robert, sibling’s in-law Ella Dee and Phil, Kathleen and Arvalee, and Rob Roy, nephews Benton and Bobby, and scores of cousins. They all huddled round to congratulate Martha on a game well played.

In this adventure-packed game that lasted 30,720 days, Martha married her high school sweetheart, John Nichols the summer after graduation, ran the rural Plainview Grocery store, followed her honey from Highway 60 to Tennessee to California, then across the big pond to Vitoria, Spain. In Spain, Martha made the news twice: 1) the first female pilot to complete her training at the local airport, and 2) the national championship of her basketball team. The latter resulted in a new rule inspired by Martha: no foreigners allowed to play in the league.

Across the pond again in 1970 to Athens, Ala., Martha pulled out her backpack and gym shoes to return to college for her Phys Ed degree. She studied, played ball, drove carpools, and sometimes declared, “We’d get so much more done if we didn’t need sleep!” The game became heated when, during her senior-year, a member of the visiting basketball team grabbed her arm, flinging the wiry redhead down, and breaking her arm. Down but not out, Martha sat on the bench with her coaches most of her final season and enjoyed her first taste of sidelines and coaching. Martha completed her student teaching under the tutelage of Myra King, who became a fast friend, co-coach, and cohort in a sought-after volleyball travel referee duo.

After six years, John and Martha loaded up and north on I-65 to Tennessee, where stone by Tennessee stone they built a house together. Martha acquired new skills (painting, weaving electrical wiring and PVC through studs and flooring, and so on), all good practice for three houses they would remodel when life came full circle, from Tennessee, to Mississippi, and back to the farm on Highway 60 in Plainview where her sweetheart was raised.

Martha became a vibrant, loving member of the community and Plainview Baptist Church. At Fairpop Farm, Mama Nick treated her grandchildren, their friends, and local children to cookies, ice cream on a stick, trampoline tricks, swimming pool antics, hoops, and so much more.

None of us grasped the magnitude of the work she did until we stood in the weeds without her, surrounded by untidy fences, and gazing at a garden gone to dandelion and nutgrass. Without Martha in the game, John’s to-do list doubled; her children, Pennie (Steven) and Johnny scramble to collect recipes and life-hacks; her grandchildren Audrey, Soraya (Jarvi), Samir, Tré, and Franky stare into empty cookie tubs. One more gingersnap? Praline? Buckeye? Snickerdoodle? Her brother Wayne (Anita) and her former son-in-law Ziad (Betsy) whip up food for comfort in Martha’s kitchen, while the rest of us draw straws on who will clean up after them in her absence. At her beloved Plainview Baptist Church, eyes will peer over the counter another season longing for Mrs. Martha’s brownies.

Martha’s fine, y’all, surrounded by family, shaking her head as she watches us pull ourselves together. We’ll channel her energy and sweet tooth with gingersnaps and brownies at the reception following her service.

Martha loves flowers, so, sure, send flowers! Or if you prefer, donate to Martha’s Fitness Fund at Plainview Baptist Church, a fund dedicated to providing equipment and supplies for youth and adult physical activities at PBC.