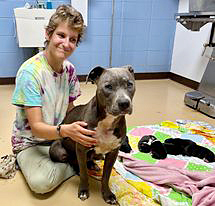 Special to The Daily News

The Humane Society of Louisiana (HSLA) credits the quick action of the director of the Washington Parish Animal Shelter and a friendly deputy for rescuing a nursing, sweet pit bull and her six puppies.

On May 24, a caller informed the shelter that they saw a skinny blue and gray-colored pit bull and some puppies in the woods near Franklinton. In the pouring rain, Washington Parish Shelter Director Kelsey Knight and her husband, Derrick, former animal control officer, Mark McMorris, and a sheriff’s deputy spent more than an hour looking for the skinny mama and her puppies. Fortunately, the deputy located the scared nursing dog while others heard puppies crying and whimpering nearby. They found the puppies huddled together in a makeshift den that the protective mother had made in the woods. They named the mamma dog Maggie Blu.

One of the puppies was covered with flies and maggots, but the team successfully removed them, and she’s expected to make a full recovery. A subsequent exam of Maggie Blu found that someone had flogged her with a whip or cord, which left scars on her back, rib cage, and face. The rescue team also suspects that the same person who beat her likely dumped her and her litter near the wooded area where she was found.

The Washington Parish Shelter is currently full and is hoping an individual or rescue group will foster the canine family until they are old enough to be adopted. Maggie Blu and her puppies are all very docile and sweet, according to Knight. To reward the quick actions of Knight and her team, HSLA is presenting the shelter with a $100 Petco gift card and hopes that others in the Washington Parish community will also donate blankets, crates, food, and other essential supplies.

“We are very grateful to Kelsey and her team for rescuing Maggie Blu and giving her a much-needed second chance,” HSLA Director Jeff Dorson said. “We also hope that someone in the community or a rescue group will give Maggie Blu a quiet place to nurse her puppies. Shelters are often loud and overcrowded, which makes it difficult for nursing mothers to care for their young. This is a team effort, and we hope that others will come forward to help.”

“When I realized that someone whipped or lashed Maggie Blu, I vowed that I would do everything in my power to help her,” Knight said.

Those wishing to help can contact the shelter at 985-839-7825 or by email at washingtonparishanimalshelter@gmail.com.

Established in 1988, HSLA is one of the largest animal protection agencies in the state. 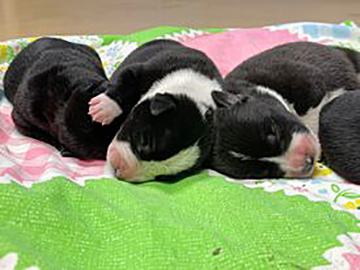 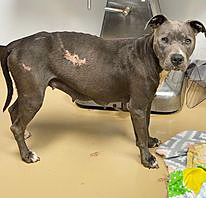 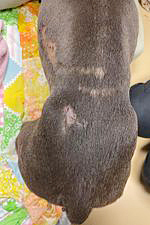